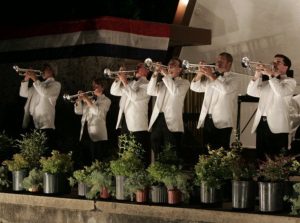 The DeKalb Municipal Band will kick off another season of summer concerts when it performs June 12 at the Hopkins Park Band Shell. All concerts are free and held at 8 p.m. Tuesdays.

Pilot program will allow parents to bring infants to work

Mothers, fathers and legal guardians who work for the Illinois Department of Public Health (IDPH) to be able to bring their infants to work in the early months of parenthood, under a new pilot program. Called Infant at Work, the idea is based on the long-term health value of breastfeeding newborns and infant-parent bonding.

The Infant at Work program is expected to provide numerous benefits for participants, including healthy infant brain development, parental well-being and critical bonding.

The program, which has been successful in other states around the country, was developed with input from the IDPH Office of Women’s Health and Family Services as well as parents with infants, is designed to lower daycare costs, increase family supports, provide more breastfeeding opportunities for mothers, and give fathers the ability to be more involved with their babies. Moreover, the Infant at Work program is expected to reduce the amount of time parents are away from work, help new parents manage the difficult transition back to the workplace, and ultimately improve morale at the agency.

Parents with infants between four weeks and six months of age are eligible to participate, depending on their job duties and location. After 24 months, the program will be evaluated to determine if it is suitable for other state agencies.

Sheriff wants to throw you in the slammer

Innocent people are being sought to spend some time behind bars while county law enforcement officials test out the new DeKalb County Jail.

The jail facility recently was expanded to about 140 beds, solving a decades-old overcrowding problem. The jail lost about six cells to make way for a skyway that connects the current facility to the expansion. The new facility also has a roll-call room for staff, where members would find out which post they will work during each shift. The expansion increases the size of the jail to more than 80,000 square feet, up from 46,000 square feet.

The county has to test the systems and procedures in the new facility, and is looking for citizen volunteers to be “prisoners” for one evening, June 1. Volunteers will get to experience being booked into jail, having a mug shot taken, sitting in a jail cell, and eating with fellow inmates.

The privilege of helping the county will cost $40. The money will be given to charitable organizations that provide vital services to the jail. Any DeKalb County citizen who is age 18 or older, passes a background check and submits a check for the amount payable to DeKalb County Government is eligible. There will be two booking times: 4-5 p.m. and 6-7 p.m. “Prisoners” will be sprung about three and a half hours later.

Volunteers may choose which charity to direct their “fine” to: Voluntary Action Center, Safe Passage, CASA DeKalb County Inc. or The Children’s Advocacy Center. To register, go to dekalbcounty.org.

Municipal band prepares for another summer of concerts

The DeKalb Municipal Band will kick off another season of summer concerts when it performs June 12 at the Hopkins Park Band Shell. All concerts are free and held at 8 p.m. Tuesdays. To fully enjoy the evening, people are encouraged to come early and bring a picnic dinner.

The DeKalb Municipal Band is a tradition that goes back to 1854, when a small group of musicians fresh from the California Gold Rush formed the Silver Cornet Band. Since then, a city band in DeKalb has existed for over 160 years, uninterrupted by wars and a depression. With such a record, DeKalb claims to be the city with the oldest continuous band in Illinois.

The 83rd annual Genoa Days will be held June 6-June 9. The annual event, held in downtown Genoa, is sponsored by the Genoa-Kingston Fire Department. The nonprofit organization hosts Genoa Days as a fundraiser to support the community with new equipment, gear, vehicles and other needed supplies.

For more information, go to the Genoa Area Chamber of Commerce’s website, genoaareachamber.com, or call the chamber at 815-784-2212.