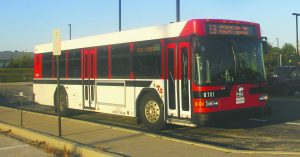 The City of DeKalb and the two public transit systems that serve it have taken the  first step toward creating a unified, city-run bus network.

The ultimate outcome of an August meeting would combine Northern Illinois University’s Huskie Line with buses run by the local Voluntary Action Center into a single system.

The Voluntary Action Center operates TransVAC buses under contract with the City of DeKalb, while Northern Illinois University contracts TransDev to operate Huskie Line buses for its students and the general population.

The changes touched Huskie Line routes 6 and 7 and TransVAC Green routes. They were renumbered to Routes 16, 17 and 18 and put under the same fare and transfer system.

The City of DeKalb is currently in the process of selecting a contractor that will operate both TransVAC and Huskie Line routes. Whoever is selected is expected to take over the service next year.

In the long run, the city is looking to expand the system and beef up the shuttle service to Elburn Metra station and access to commuter train service to the western suburbs and downtown Chicago.

In DeKalb County, that includes three fixed-route services – the former Green Line route, which serves much the city’s northern half, Blue Line route (which was recently renamed Route 21), which serves the city of Sycamore, and Routes 24 and 25, which connect Kishwaukee College to DeKalb and Sycamore, respectively.

While many public and private colleges in Illinois operate bus systems, they are usually restricted to students. Huskie Line  routes are open to general population –though non-students have to pay $1 to ride.

While most routes serve NIU campus and its immediate vicinity, Routes 10, 11, 16 and 17 serve the city, and Route 12/Elburn shuttle links the university to Elburn Union Pacific West Line Metra station on Friday and Sunday evenings. The service is funded through student fees and fares.

The 2017-2022 DeKalb Region Transit Development Plan, which acts as a blueprint for the consolidation, noted that there was no map showing both systems, making it harder for riders to figure out how to get around. It also argued that riders should be able to make free, convenient transfers between the systems.

As the plan noted, the combined system would qualify for state and federal funding – something that Huskie Line currently isn’t eligible for.

Marcus Cox, City of DeKalb Transit Manager, told the DeKalb Journal that it would make it easier to coordinate and expand the system. He said that the city’s ultimate goal is to have something like Rockford Mass Transit District in terms of size and scope.

RMTD operates a total of 24 local and express routes, serving Rockford and the neighboring

Since Routes 16, 17, 18 collectively serve significant portions of DeKalb, they were a logical place to start.

Effective Aug. 20,  the schedules were adjusted and they were brought under the same fare structure. Regular riders now pay between 25-50 cents for K-12 students and people with disabilities, and free for NIU students. Riders could make free transfers between those routes, as well as Route 21, but only at designated transfer stops.

Down the road, the plan recommends improving the schedules for the remaining Huskie Line routes, creating a Downtown Connector  route that would connect NIU and Greek Row to downtown DeKalb, and more limited workplace commuter service to Park 88 corridor.

Cox said that the plan is being used as a blueprint, but the city is not 100 percent bound by it.

Meanwhile, the city is working to secure a bus operator to take over operating TransVAC and Huskie Line routes in DeKalb. Cox said that since TransVAC routes 21, 24 and 25 are operated under contract with the City of Sycamore and Kishwaukee College, respectively, they will still be operated by VAC.