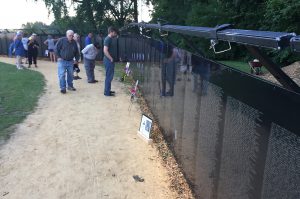 The Wall That Heals, a replica of the Vietnam Veterans Memorial in Washington, D.C. made a stop last week in Sycamore Park. (Photo by Jack McCarthy / Chronicle Media)

They’re forever young, with names engraved in granite and faces frozen in memory.

The 58,315 men and women who died during the Vietnam War are permanently honored in a simple yet eloquent memorial in Washington, D.C., ensuring they’ll never be forgotten even as memories of the conflict fade.

Scale model replicas cross the country, including The Wall That Heals, the traveling Vietnam Veterans Memorial which made a stop last week in Sycamore.

The wall, which concluded a four-day stay at Sycamore Park on Sunday, July 16, drew thousands of visitors to a sandy walkway amid a backdrop of poplar and weeping willow trees. 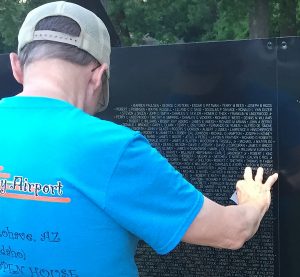 A visitor to The Wall That Heals touches the name of one of the 58,315 who were killed in the Vietnam War and memorialized on the wall. (Photos by Jack McCarthy / ChronicleMedia)

Nightly programs saluted the dead, including the 19 from DeKalb County whose names appear on the wall.

“They have come back to this park to be among us and we know that they are here,” said guest speaker Albert “Swede” Ekstrom during last Thursday’s opening ceremonies. “When you walk the grounds, you feel their presence. When you look into that wall, you sense that they, in fact, are looking back at you.”

Ekstrom was raised on a farm in Kingston Township, entered the Army in 1965 and served in Vietnam in 1967, earning several medals for valor. He went on to study at Kishwaukee College and Northern Illinois University and served as a NIU police officer for 25 years before retiring. 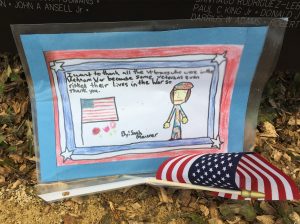 A tribute created by a young person display at the wall’s base last week at Sycamore Park. (Photos by Jack McCarthy / ChronicleMedia)

The granite memorial in Washington D.C. features the engraved name of every service member killed in a conflict that included American involvement between 1956-75.

The Washington monument was designed by 21-year-old Yale student Maya Lin and dedicated in 1982. Located on the National Mall, it is 493-feet long and rises to 10 feet at its highest point.

Ekstrom quoted from a statement on why Lin’s design was selected.

“The visual impact of the names — thousands upon thousands of them carved in granite so highly polished that you see your own reflection hovering over the writing,” Ekstrom said. “You walk toward the center of the wall, coming deeper and deeper into the enormity of the loss.”

Names are arranged in order of date of death and alphabetically on each day. The wall rises in height as the number of casualties increased, peaking in 1968 including the worst day when 246 Americans were killed on Jan. 31 of that year.

Several organizations — like The Wall That Heals — send replica walls on tour around the country.

The replicas, like the one that showcased in Sycamore, are typically half the size of the original and consist of metal panels transported via trailers. The local display also includes a mobile Education Center and information tent and a nearby field of hundreds of American flags.

The wall’s base features photos of local veterans, flowers, notes and even a child’s drawing and viewed by a procession of visitors ranging from young families with children to Vietnam veterans now in their 60s and 70s.

Some of the vets lingered at panels in contemplation while touching the name of a buddy or loved one.

Lights were mounted above each panel to permit 24-hour-a-day viewing.

The Wall That Heals has appeared in DeKalb County twice previously, with visits organized by a local chapter of VietNow, a veterans’ group.

This latest effort was spearheaded by Steve Kreitzer, chairman of the project and assistant superintendent of the DeKalb County Veterans Assistance Commission.

Organizers hoped to raise as much as $25,000 to bring the wall to Sycamore and enlisted dozens of volunteers to help in protects in the run up to the display and to assist during the four-day visit.

The wall travels from Sycamore to Superior, Wis. for four days and then on to Moline, Ill. Eighteen more stops are planned before it wraps up on Dec. 10 in Amarillo, Texas.