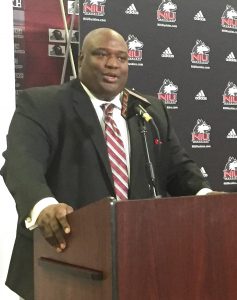 The 37-year-old Baltimore Ravens assistant was introduced as Northern Illinois University’s new head football coach during a Jan. 18 on-campus press conference and in a later appearance in Chicago.

“This has always been a dream of mine,” said Hammock, a former Huskie running back and two-time academic All-American. “When I was a graduate assistant at Wisconsin I wanted to be the head coach at Northern Illinois University.”

Hammock, who once lived in the Douglas Hall dormitory and met his wife, Cheynnitha, on campus, is the first NIU graduate since Howard Fletcher (1956-68) to run the program and first African-American.

“I’m humbled and honored to be here,” he said. “I know it comes with a great responsibility.”

“This is a huge hire,” said Frazier. “To be able to bring back a part of our tradition, particularly from the (Coach Joe) Novak era … and have someone who’s iconic in our history books is fantastic.

“We had a very good candidate pool,” Frazier added. “But Thomas quickly rose through the ranks … He was the clear choice.”

As an NIU assistant he coached Garrett Wolfe, who rushed for a all-time school record 5,164 career yards and led the nation in rushing with 1,928 yards in 2006.

As a player, Hammock was a three-time letter winner, rushing for 2,432 yards on 544 attempts which still ranks 13th all-time.

His career was cut short after one game during his senior year due to a heart condition. Hammock went on to earn a bachelor’s degree in marketing from NIU and a master’s in educational leadership and policy analysis from Wisconsin.

NIU is coming off a Mid-American Conference championship season, the latest in a long line of recent successes that included a trip to the Orange Bowl in 2013.

Hammock is now charged with maintaining that high level.

Hammock will have a lot of fans — including former coaches — rooting for his success.

“I told Thomas several times when he was playing for us that he could be a great coach if he’d ever go in that direction,” Novak said. “He’s a bright guy, he really is. He’ll be a great leader for the program.”