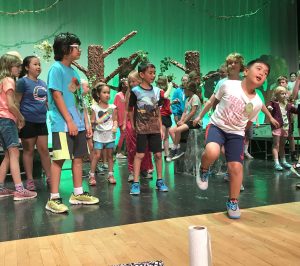 It’s 8:57 a.m. on a steamy Friday as a handful of stragglers rushed into the Sycamore High School auditorium for another day of summer theatre camp.

Clutching green-covered scripts, the last arrivals joined nearly 40 other young actors on a crowded stage with minutes to spare. They were about to rehearse a scene from an upcoming production of Disney’s “The Jungle Book Kids.”

Show time was just one week away and it was starting to get serious for the group, still only halfway through learning parts, dances and songs.

But Sue Price Johnson, SHS Performing Arts Director and chief camp counselor was confident they would be ready for performances at 7 p.m. on Saturday and 2 p.m. Sunday.

“They’re doing really well,” she said. “There are 20 songs in the show and scenes that go along with those songs. They’re learning two or three a day, depending on the length. On Wednesday, Thursday and Friday (of this week) all we’ll do is run the show so that they get a really good idea of the flow of the show.”

Last Friday’s first exercise was to review of what campers learned the previous day.

They spent more than 20 minutes working through a scene that featured a large entourage, figuring where everyone needed to be on stage. A smaller group worked on lines and movements.

The kids were serious and paid attention with a minimum of talking or horseplay more likely to find at a sports camp.

“They’re such great kids, nothing throws them off,” said Price Johnson. “You don’t see bullying in theater, which is nice. They all care about each other and take care of each other.”

Price Johnson, a veteran of regional and DeKalb County theater. Her two-week camp,  now in its third year, includes 64 participants and is geared towards youths from kindergarten through eighth grade.

Campers get the full theater experience ranging from backstage work to speaking, dancing and singing on stage before a live audience.

Everyone who signs up participates. No one is cut. 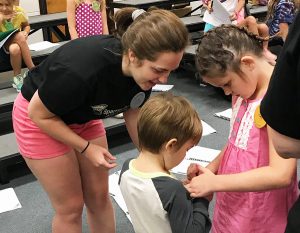 “It’s an all-inclusive, hands-on camp,” she said. “Every student is assigned a part, they all get lines to memorize, they get songs to learn, dances to learn. On Monday we all start working on props and costume pieces.”

The camp draws participants from beyond Sycamore and District 427, including a mix of theater newbies to experienced performers.

Price  Johnson is aided by co-director Karla Gulke, a District 427 kindergarten teacher who tends to work with the younger performers. Veterans of Price Johnson’s current SHS program  also lend a hand and two current college students are also back to help.

Eleven-year-old Felipe Beharovic, a sixth grader-to-be at Sycamore Middle School, is a first-timer at this camp but performed previously at his old school, Cornerstone Christian Academy.

“I love acting, having fun, meeting new friends from the cast, learning the music and choreography,” he said. “I love it all.” 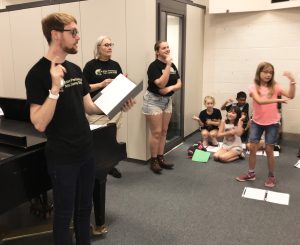 “This is my third year doing this particular camp and I also did another camp this summer — that had Aladdin,” said Grace, who has one of the lead roles in Jungle Book. “I love being able to perform and have fun. (And) the little kids are always coming up and asking (questions).”

The “Jungle Book Kids” is the latest iteration of a seminal work by author, journalist and poet Rudyard Kipling (1865-1936).  He wrote extensively on a variety of subjects and won the Nobel Prize for Literature in 1907.

“The Jungle Book” is a collection of childrens’ stories featuring a little boy (Mowgli) who is raised by wolves in a jungle in India. The stories have spawned music, comic books, animated TV series and served as inspiration for such authors as science fiction writer Robert Heinlein and the eclectic Neil Gaiman.

But “The Jungle Book” is perhaps  best known for the 1942 film, a 1967 Disney animated effort and  2016 remake plus a 2004 stage adaption and the current musical version that Price Johnson’s campers are staging.

Involvement in this effort and other theatre experiences can have a long-lasting impact.

“Theater is such a wonderful thing for children,” Price Johnson said. “It gives them confidence. Not everybody, of course, will go on doing theatre in their life. But the value of things they learn on stage — not being afraid to speak in front of an audience — that’s going to help them in all aspects of their life.”

General admission tickets are available for $5 at the door or in advance at www.sycamoretickets.org.