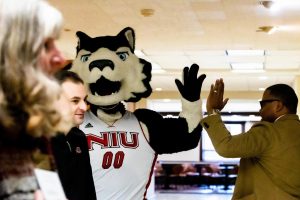 Northern Illinois University has plenty of reasons to cheer as it kicked off a 125th anniversary last week on the DeKalb campus.

From origins as a humble state teacher’s college to a sprawling university noted statewide and nationally, NIU opened a nearly year-long series of observances with a Jan. 30 Holmes Student Center event.

“We were founded with a simple goal of creating more teachers in 1895,” said Dr. Lisa C. Freeman, NIU’s 13th president in remarks at a reception. “Since then we have evolved to embrace our our current vision being an engine of innovation, to advance social mobility, to promote personal, professional and intellectual growth and transform the world.”

Unlike a landmark 100th anniversary (centennial) or 200th (bicentennial), the 125th has a lesser-known name that’s a mouthful to pronounce.

“A quasquicentennial means quarter past centennial,” said Matt Streb, Freeman’s chief of staff and co-chairman for the 125th anniversary planning committee. “And while that name doesn’t exactly roll off the tongue, we are in fact, 25 years into our second century of existence operating under our fourth, and hopefully final name and with more than a  quarter-million proud alumni.

“That’s a lot to celebrate.”

Fast-forward and today’s university offers more than 100 undergraduate programs and 69 graduate degrees. NIU graduates can be found in occupations around the nation and world.

“The journey over these 125 years has been marked with great growth and even, at times, great loss,” said Freeman. “Our guideposts and what makes NIU a standout, is our deep commitment to our values: curiosity and creativity, equity and inclusion, ethics and integrity, service and stewardship.” 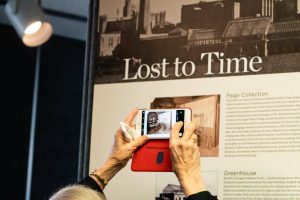 Enrollment has slipped from a peak of more than 24,000 to a reported 16,609 in Fall 2019, a loss partly attributed to changing demographics and a recent state budget crisis. University officials hope the decline has bottomed out and have devised policies to help restore growth and reach a goal of 18,000 students by 2023.

Last week’s reception and kickoff was the first in a series of events that concludes with a Dec. 1 closing ceremony at the Altgeld Hall Auditorium.

A 125th Anniversary exhibition officially opens this week at Founders Memorial Library and celebrations are planned this week at NIU’s satellite campuses, including Naperville (Feb. 4), Rockford (Feb. 5) and Hoffman Estates (Feb. 6). A week-long Chicago commemoration is planned in July.

More information on history, activities and upcoming events can be found at at www.niu.edu/anniversary.