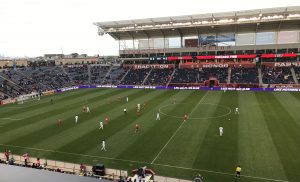 : The Chicago Fire of Major League Soccer were the main tenants at a 20,000-seat stadium opened in Bridgeview in 2006. Northern Illinois’ football team will play Brigham Young in October at the arena, the first major college football game at SeatGeek Stadium. (Photo by Jack McCarthy / Chronicle Media)

The Huskie Chi-Town Showdown returns this fall with a nationally known opponent and a new venue.

It’s the first major college football game at the venue, which opened in 2006.

“Over the years, we have brought Huskie Football to our alumni and supporters in Chicagoland by playing games at Soldier Field and at Guaranteed Rate Field,” Sean Frazier, NIU athletic director, said in a statement. “In 2020, we’re excited to play a storied program like BYU in a new location for us, SeatGeek Stadium, and look forward to filling the venue with Huskie fans for this Saturday game in October.”

The BYU game was originally scheduled to be played at Huskie Stadium, which has a capacity of nearly 24,000.

The 20,000-seat SeatGeek Stadium, located at 71st Sreet and Harlem Avenue, is located a handful of blocks outside of Chicago. Moreover, the stadium is just 12 miles from the Loop, close enough to potentially attract city-based alumni from both schools as well as casual college football fans.

NIU claims 160,000 alumni across Illinois. A number of BYU graduates in Illinois was not immediately available.

The announcement drew a fair amount of ire on social media.

“This is a terrible idea,” wrote one Facebook poster. “On the 125th anniversary of this institution, we take probably the best game on our 2020 schedule and move it, not to Chicago, but a second-rate soccer stadium that the Chicago Fire abandoned.”

NIU will still host five games in DeKalb, starting with a Sept. 5 nonconference match against Rhode Island. NIU has not officially released its schedule, but other sources have the Huskies on the road for games at Maryland (Sept. 12) and Iowa (Sept. 26).

The Chi-Town Showdown premiered in November 2016 at Guaranteed Rate Field, home of the Chicago White Sox.

That nationally televised Thursday night game against Mid-American Conference rival Toledo drew a disappointing crowd of 10,180 as the Rockets rallied for a 31-24 victory.

NIU officials had reportedly sought to change the game to a Saturday in hopes of a better crowd, a switch rejected by the conference.

The Fire had been the prime tenant at SeatGeek Stadium since the soccer-specific venue opened in WHEN.

But new owner Joe Mansueto, who purchased the team from Andrew Hauptman last year, opted to depart the longtime Bridgeview home to return to Soldier Field.

The move was part of a wholesale repositioning of the struggling Major League Soccer franchise, which missed the MLS playoffs in eight of the past 10 seasons.

SeatGeek Stadium is still home to the Chicago RedStars of the National Women’s Soccer League, which reached the 2019 NWSL championship game.

The transition from soccer to football should not be a challenge since field dimensions are similar and there’s ample room for end zones, a problem that plagued Northwestern and Illinois when they played at Wrigley Field in 2010. The Wildcats and Illini could only use one end zone.

Tickets for the NIU-BYU game are already on sale for $35, $25 for NIU season ticket holders. Students will receive one free ticket and can purchase guest tickets for $25.

More information is available at NIUHuskies.com.