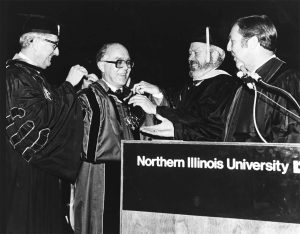 “All of NIU is saddened by the passing of William Monat,” Acting NIU President Lisa Freeman said in a statement. “His contributions to the creation of the NIU College of Law and the College of Engineering and Engineering Technology helped cement the reputation of NIU as a well-rounded university prepared to meet the needs of our region. He was a visionary whose impact can be felt to this day.”

Monat was NIU president from 1978 to 1984, having served as chairman of the Department of Political Science and as academic vice president and provost. During Monat’s tenure, doctoral programs in education, geology, biological sciences and mathematical sciences were added at NIU, and the College of Law opened in 1979.

He continued to serve as an adjunct professor of public administration after retiring from the university in 1992. He and his wife, Josephine, maintained a home in DeKalb.

“He never stopped ‘teaching’ even after his official retirement. He was my Ph.D. advisor, along with Jim Banovetz,” she commented on Facebook. “He always encouraged me, even long after I’d taken the position at NIU. He understood government and politics in Illinois, and several times I sought his counsel on behalf of the institution. A fabulous leader and inspiring mentor.”

From 1984 through 1986, Monat was the first chancellor of the Illinois Board of Regents, which governed Northern Illinois University and two other state universities until 1996.

Monat also served a 10-year term as chairman of the DeKalb Planning Commission and was appointed a trustee of the DeKalb Sanitary District.

“Bill Monat was a good man and a good president of NIU and chancellor of the Board of Regents System,” former NIU President John Peters said in a comment on Facebook. “He developed NIU into a research university. He was a first-rate political scientist, and his book, ‘The Achieving Institution,’ tells us about his perspective on NIU. Jo and Bill were great friends and supporters of Barb and I, and we will miss him greatly.”

Monat also served as academic vice president of Baruch College of the City University of New York and as consultant to the U.S. Department of Labor, the U.S. Office of Economic Opportunity and the Commonwealth of Pennsylvania.

He also served as executive assistant to the governor of Michigan and as director of budget and finance for the speaker of the Pennsylvania House of Representatives.

He is survived by his wife, Josephine, three daughters, two sons and 12 grandchildren.

The family asks that memorials be made to the William R. Monat Scholarship Fund through the Northern Illinois University Foundation.