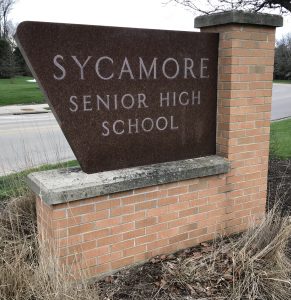 Sycamore High School is expected to officially join the Interstate Eight Conference this fall, pending this week’s approval by the District 427 Board. (DeKalb Journal photo)

Sycamore High School’s search for a new athletic conference was expected to reach a successful conclusion this week.

The school looked ready to link with a revamped Interstate Eight Conference — its fourth conference in a quarter century — starting this fall.

The District 427 School Board had planned to vote on April 23 to join the Interstate Eight, giving Sycamore athletes and other academic and extracurricular participants competitive opportunities against schools ranging from Morris and Ottawa to Plano and Sandwich.

The board met on April 16 at Sycamore Middle School to review revamped Interstate Eight bylaws as part of an informational first reading.

No votes were taken, but there were also no vocal objections to the rules or affiliation. A second reading and vote were scheduled for one week later.

In an era of multiple conference changes around Illinois, both Sycamore and the Interstate Eight were looking at measures to maintain membership stability.

“The principals from the proposed conference have been meeting and have developed the constitution or organizational bylaws,” said Nick Reineck, Sycamore High School dean of students. “They would like a contractual agreement with board approval to move forward and hold schools accountable so people can’t keep breaking off (from) conferences as has been done in the past without any repercussions.”

Two major elements would help bind the league, including a two-year notice of intent to withdraw and payment of two years of conference dues. The other section covered parity in the league and an enrollment cap to be reviewed every two years. If a school grew beyond enrollment caps, it could potentially be asked to leave.

Along with Sycamore, the revamped and geographically compact Interstate Eight would include Kaneland, LaSalle-Peru, Morris, Ottawa, Plano, Rochelle and Sandwich. 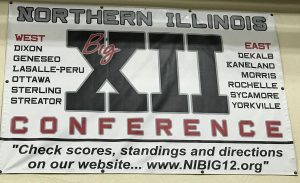 The Spartans are currently in the Northern Big 12, a league the school joined in 2010. (DeKalb Journal photo)

The Interstate Eight would be Sycamore’s fifth conference since early in the 20th century and fourth since the mid-1990s.

Sycamore, which was among seven founding members of the Little Seven in 1921 and — with Batavia and Geneva — stayed with it until the league dissolved after the 1994-95 school year.

Sycamore then linked with the fledgling Suburban Prairie, maintaining membership until 2005-06. From there it was on to four years in the Western Sun before the school moved to its current home, the Northern Big 12, in 2010.

The Interstate Eight had as many as 12 members as recently as 2018. Then came an exodus of 10 schools, including eight that formed their own new conference. Plano and Sandwich, the remaining I-8 schools, opted to rebuild the league with new members.

With an enrollment of 1,840, DeKalb would be the smallest DVC school. Neuqua Valley will be the largest at 3,662.