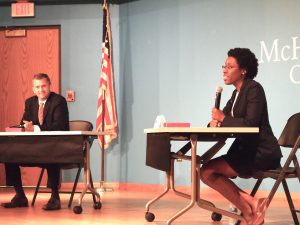 Congressional challengers Sean Casten and Lauren Underwood promise to be more accessible to the public than the Republican incumbents they are running against in the General Election.

Underwood, the Democratic challenger in the 14th District, said she was taken aback by the response she got when walking in the Sandwich Freedom Days Parade this summer.

“People were like ‘You came here?’ You came to our town?’ … I promise to show up,” Underwood said at a League of Women Voters’ question-and-answer session Sept. 10 at McHenry County College. “All the little towns where no one has seen a representative in years, I’ll show up.”

When campaigning in Sandwich, Underwood said, she was told by more than one person that “a Democrat has not knocked on my door in 10 years.”

Underwood said she intends to have open forums with quarterly town hall meetings to get residents’ input on issues. 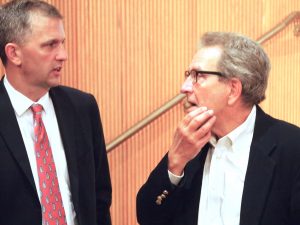 “They know their values are out of touch with the districts they represent,” Casten said during the question-and-answer session.

Casten noted that Roskam has not held a town-hall meeting “since before (Barack) Obama was elected.”

By failing to connect with constituents, Casten said, the Republicans are trying to shield that their views are out of sync with residents’ viewpoints.

“If they continue to campaign through other resources (than public appearances), they think they can stay to the far right,” Casten said.

Neither Hultgren nor Roskam attended the event.

A representative of the League of Women Voters said that Hultgren declined the group’s invitation to attend and that Roskam never responded to the invitation.

Casten said as a clean energy entrepreneur, he never expected to be running for elected office. However, he said, after selling his company in 2016, he could not sit idly by when Roskam and others were voting on the wrong side of climate change and health care issues.

“We spend more on health care than any other country,” Casten said.

Health care also played a role in getting Underwood, a 31-year-old registered nurse from Naperville, to toss her hat in the ring for the 14th District congressional seat.

When Hultgren reneged on that promise and supported Republicans’ gutting of the ACA, Underwood said, she became a political candidate. 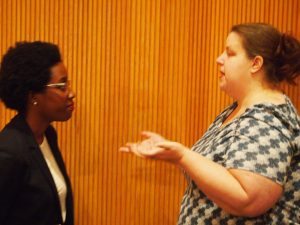 Underwood and Casten both said that common sense approaches to gun reform have to be enacted to keep students safe in school.

“I am horrified by the frequency of mass shootings,” Underwood said. “Our kids should not be afraid to go to school.”

She said when 97 percent of residents support common sense gun reforms like increased background checks, but action is still not taken in Congress something is wrong. Underwood added when teachers are digging into their own pockets to supply needed materials for their classrooms, school districts should not be spending money to arm teachers.

“It would be vastly better to allocate finances to get at the root cause of this senseless violence than arming schools,” Casten said. “I’ve never met a teacher who wanted to carry a gun in the classroom.”

He said every recent school shooting has been committed by a white man with a history of domestic violence. Casten said schools get safer when we as a country identify these individuals and get guns out of their hands before tragedies occur.