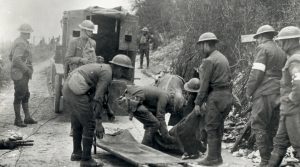 During World War I, medics tend to wounded Germans at the 28th Infantry Regiment aid station near Cantigny, May 28, 1918. At precisely 11 a.m. Nov. 11, 2018, Americans across the nation will toll bells in remembrance of those who served and sacrificed in the war that changed the world. The public is invited to gather at Cantigny Park, 1S151 Winfield Road, Wheaton, to remember the day the way ended.

DuPage County was one of 27 organizations or companies in Illinois that received the award for its significant achievements in protecting the environment, helping sustain the future, and improving the economy. The winners were announced recently during a ceremony at the Union League Club in Chicago.

The Illinois Sustainable Technology Center (ISTC) administers the awards, which are presented to organizations in Illinois that have demonstrated a commitment to environmental excellence through outstanding and innovative sustainability practices. DuPage County received the award based on the Vactor Receiving Station, the electric car charging station located on campus, the county’s Sustainability Best Practices Guide, traffic signal upgrades, installation of energy-efficient lighting on campus, and other efforts to reduce waste and increase energy. Thanks to these energy efficiencies, the county saves more than $868,000 annually.

Any Illinois public or private organization is eligible to apply for the award. Winners are selected through a rigorous process of review and examination by ISTC technical assistance experts.

Crews from the Forest Preserve District of DuPage County will conduct prescription burns at selected sites in the coming weeks.

The burns help restore native prairies, wetlands and woodlands and take place in late fall after the season’s vegetation has died and in early spring before new vegetation emerges.

The burns will be done in the daytime, weather permitting. Residents who live near planned burn locations will receive information in the mail. The district will also post signs and notify local fire departments.

National holidays and special days are the inspiration for concerts Naperville City Carillonneur Tim Sleep and Carillonneur Jim Brown will perform this month.

At a Veterans Day program 3-3:30 p.m. Nov. 11, Tim Sleep will play patriotic music and will feature the tolling of the 6-ton bourdon, “Big Joe,” in remembrance of the 100th anniversary of the ending World War I. The tolling is coordinated with carillonneurs all over the world on that day.

Sleep will play a special piece that was commissioned in honor of the installation of a Peace Carillon at Park Abbey in Leuven, Belgium and the ending World War I. The piece that will be premiered in Belgium, in Naperville and in at least 50 more locations is entitled “A Sacred Suite” by Flemish carillonneur and composer Geert D’hollander.

Naperville Carillonneur Jim Brown will perform his annual concert of early American music in honor of Thanksgiving at 12 p.m. Nov. 22. At 12 p.m. the next day, Nov. 23, Tim Sleep will play a concert of holiday favorites to kick off the December holiday season.

The Millennium Carillon recitals are partially supported by a grant from the Illinois Arts Council Agency.

Indian Prairie School District School District 204, in partnership with Digital Promise Global, has been awarded $300,000 for a three-year project to improve students’ computational thinking, with a focus on improving achievement for students from low-income families.

The three-year project is funded through a $1 million grant from the National Science Foundation.

The research will help engage girls, low-income and other under-served students in computing, beginning in kindergarten and continuing through high school.

At precisely 11 a.m. Nov. 11, 1918, an armistice was declared silencing the warfare that had echoed across Europe for the prior five years.

At precisely 11 a.m. Nov. 11, 2018, Americans across the nation will toll bells in remembrance of those who served and sacrificed in the war that changed the world.

The public is invited to gather at Cantigny Park, 1S151 Winfield Road, Wheaton, to participate in this nationwide event, Armistice Day: Bells of Peace. Bring your bell, or use one of the park’s centennial commemoration bells (that will be available while supplies last). Afterward, warm beverages will be served at a Victory Tea. Guests will be directed then to view the First Division Museum. The festivities will include a special bagpipe performance by the Firefighter’s Highland Guard of Naperville. Admission is free.

This day’s plans are part of a series of events presented by the First Division Museum at Cantigny Park to commemorate the centennial of the Battle of Cantigny and World War I.

Connecting with nature has many proven health benefits. Retta Hennessy, a certified Forest Therapy guide at Lake Ellyn and Churchill Parks, will show how to immerse yourself in natural settings through mindful movements and observations, gain insights about local ecology, and better understand the physical and mental benefits of this growing practice. The public is invited to meet at 1 p.m. at Lake Ellyn Park, 645 Lenox Road, Glen Ellyn.