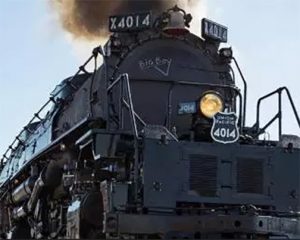 Union Pacific’s historic Big Boy steam locomotive No. 4014 is touring the Union Pacific system throughout 2019 to commemorate the transcontinental railroad’s 150th anniversary — and will come through Kane County and stop in West Chicago in late July.

of sexual abuse of minor

A West Chicago man has been found guilty of sexually abusing a 17-year-old girl whom he coached in a private athletic club.

The verdict stems from allegations that from March 24-31, 2018, Miki sexually abused his victim on two occasions at his home in West Chicago. The girl’s parents grew suspicious of her relationship with Miki and contacted authorities. On Dec. 12, 2018, Miki appeared in Bond Court where bond was set at $75,000 with 10% to apply.

“This afternoon, Judge MacKay found Jon Miki guilty of using his position of trust and authority over a seventeen-year-old girl to satisfy his sexual desires,” said State’s Attorney Robert Berlin. “Not only did Mr. Miki abuse his victim, he also abused the trust placed in him by the victim’s parents as well as the athletic community in which he was involved.t.”

Miki’s next court appearance is scheduled for Aug. 1 for sentencing.

through local counties in July

Union Pacific’s historic Big Boy steam locomotive No. 4014 is touring the Union Pacific system throughout 2019 to commemorate the transcontinental railroad’s 150th anniversary — and will come through Kane County in July.

The “experience” is a brand new, multi-media walk-through exhibition that provides a glimpse at the past while telling the story of modern-day railroading. Through sound, images and interactive technology, rail fans will see how Union Pacific is building America in their communities and throughout the world.

People will be able to see the train as it travels through Kane County, as well.

The Big Boy’s return to the rails is the product of more than two years of meticulous restoration work by the Union Pacific Steam Team. No. 4014 is the world’s only operating Big Boy locomotive.

‘Home Grown’ is theme of

The Wheaton Independence Day Parade is a long standing tradition that draws thousands of people and will display more than 90 parade entries this year.

This year’s parade theme, Home Grown, celebrates those that founded the town in the 1830s and those who continue to make it their home.

The celebration starts July 3 in Graf Park with a carnival, DJ, food vendors and activities for all ages. Once darkness falls, the sky will burst with pops of color, light and sound with the District’s annual firework display.

The celebration of the nation continues the next morning with the Wheaton Park District and the City of Wheaton’s annual Fourth of July parade, led by Grand Marshals from the Wheaton Lions Club.

The “Home Grown” festivities begin on July 3 at Graf Park (1855 Manchester Rd.) at 5 p.m. with fireworks beginning around 9 p.m.

The Summer Place, Naperville’s community theatre since 1966, will be performing “My Three Angels” for one weekend only, June 28-29.

The play, on which the Humphrey Bogart movie “We’re No Angels” was based, tells the story of a kind-hearted shopkeeper in French Guiana whose family is being cheated by a scheming cousin. Three convicts working on the roof decide to help the family and work a Christmas miracleTickets can be purchased online or at the box office before each show. See summerplacetheatre.org for

An ice cream party with prices from 1949 will close out the “Signs of the Times” exhibit at the Aurora Historical Society at the Pierce Art and History Center on June 29 from noon-4 p.m.

The exhibit displays one hundred signs dating back as far as the 1880s, and includes signs from train stations, restaurants and bakeries, street corners, Phillips Park, political campaigns, schools and other aspects of Aurora history.

They are electric, neon, painted, printed, and even sewn.  There is a faded hand-printed sign announcing the appearance of John F. Kennedy in Aurora, put up just days before he won election to the presidency, and taken down only after his assassination three years later.

“You forget how the streetscape changes over time,” said long-time volunteer Bill Walsh,  who helped mount the exhibit.   “Signs come and go, and we don’t remember them very long.  But I’ll tell you what, for me the prices on that Valley Maid sign really brought back memories.”  It was Walsh’s idea to sell the ice cream during the closing reception.

The exhibit is open Wednesdays-Saturdays from Noon-4pm.  June 29 is the last day.  The Pierce Center is at 20 E. Downer Place.  Admission is free, but donations are appreciated.

Organizers of a  popular summer concert series in downtown Aurora will try again this week after two mid-week events were affected by the rain this June.

Wednesdays at the Plaza was supposed to start on June 12 with Blues on the Fox Preservation Band performing and Harvey’s Fire Box feeding the crowd. The posters were up, the Facebook invite was promoted, and organizers were ready. The weather had different plans, and the series kickoff for Blues Week was cancelled.

“We’ve had to cancel due to rain in the past, but never the first two dates of the season,” she said.

“We still have a handful of concerts scheduled, and we hope to reschedule the ones that were rained out,” she said.

Mirabelle Skipworth and Olivia Ports perform from 6 to 8 p.m. on June 26. Don Pez Fish Tacos will serve food in the lawn.

The second week was to feature AKA Dance students performing and offering a free dance class. Grumpy Gaucho was set to park on Stolp Avenue with hot empanadas. No dice. More rain.

“It’s been a bit frustrating since the series has been planned since the late winter months, and we were looking forward to warm summer days listening to music in the gazebo,” said Marissa Amoni, manager of Aurora Downtown.

Aurora Downtown hosts the free concert series at the Millennium Plaza gazebo at 21 S. Stolp Ave. It’s a sponsored series, Amoni said, which adds to her eagerness to get it going.

All concerts start at 6 p.m. and feature a visiting food truck.

For more information, visit www.auroradowntown.org, or Aurora Downtown on Facebook.