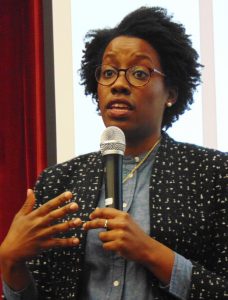 Rep. Lauren Underwood (D-14th) summarizes a lengthy list of bills passed by the Democratic-controlled U.S. House of Representatives during a Town Hall meeting with constituents at Yorkville Middle School on Saturday. (Photo by Jack McCarthy/Chronicle Media)

Too many residents of the 14th Congressional District are paying the price for federal limits on state and local tax reductions, according to the district’s congresswoman.

Lauren Underwood said because of that, she and her fellow freshman Illinois Democratic U.S. Congressman Sean Casten (6th District) have proposed increasing the tax deductions by another $5,000.

“Many (income tax) filers in the 14th District got a rude awakening,” Underwood said at a town hall meeting Saturday (April 13) at Yorkville Middle School. “The Republican tax law that was approved in the last Congress capped SALT (state and local tax) deductions this year. The 14th District is among the top districts in the country for filers itemizing to fully deduct local and state taxes.”

The SALT deductions, which had been unlimited, were capped at $10,000 for this year. Underwood said that the average resident of the 14th District deducted $13,000 in SALT payments last year.

While legislation has been presented to again return to no cap on SALT deductions, Underwood and Casten have presented legislation that would raise the SALT cap on federal income tax to $15,000.

She said that would be beneficial for 93-95 percent of residents in her district.

The Naperville Democrat said that going back to no SALT cap would be too beneficial to the top 1 percent of Americans, people who ought to pay more in taxes.

Underwood noted that Saturday was her 100th day in office.

The freshman congresswoman said she is happy to be serving on Education and Labor, Homeland Security, and Veterans Affairs committees.

“From Day 1, health care has been a focus, protecting people with pre-existing conditions,” Underwood said of her health care work, which falls under the Education and Labor Committee.

She noted that the U.S. House has had to defend the state of Texas’ lawsuit against the Affordable Care Act because the Trump administration will not.

“The House is the only federal body that will represent the government,” Underwood said. “We need to protect people with pre-existing conditions and the ability to keep kids on your insurance.”

She was proud to say the first bill she presented was to stifle junk health care plans. 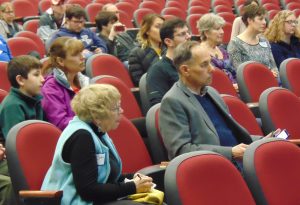 Audience members listen attentively as Rep. Lauren Underwood (D-14th) discusses legislation passed by the U.S. House of Representatives during the past 100 days at a Town Hall meeting with constituents at Yorkville Middle School on Saturday. (Photo by Jack McCarthy/Chronicle Media)

Underwood got mixed reviews from constituents during her first town hall.

“I’m really disappointed,” Joe Stupek of Aurora. “The government is on fire. The Republicans aren’t being blamed for starting the fire, but Democrats are to blame for not putting it out.”

Retired Air Force veteran Norma Garza of Yorkville, who served three tours of duty in Afghanistan, said she was thankful that Underwood came to the far west suburb to talk with residents.