They’re not out to seize firearms or gut the Second Amendment to the U.S. Constitution.

But survivors of February’s fatal shootings of 17 in a rampage at Marjory Stoneman Douglas H.S. in Parkland, Fla., adamantly insist on sensible regulation and responsible gun ownership.

Present and former Stoneman Douglas students brought their message to a Naperville town hall meeting Saturday, greeted by an overflow and supportive crowd of youth and adults at the DuPage Unitarian Church.

“A lot of people have said we are this liberal army coming to disarm the law-abiding citizens and that is ridiculous, a flat-out lie,” said Matt Deitsch, a 20-year-old Stoneman Douglas graduate.

“We are trying to prevent gun violence,” he said. “It has nothing to do with the Second Amendment. It has everything to do with protecting American citizens, protecting our children so we don’t have to worry or fear for our lives anymore.”

Last week’s west suburban appearance was the second by the Parkland delegation, part of a scheduled 50-stop Road to Change tour through 20 states.

“All we want is to inherit a country and a world that is safer and better,” said Cameron Kasky, a 17-year-old Stoneman Douglas senior, whose family also owns guns. “This is not a movement where we’re trying to take away legal protection … But we believe there should be (gun) laws, limitations.” 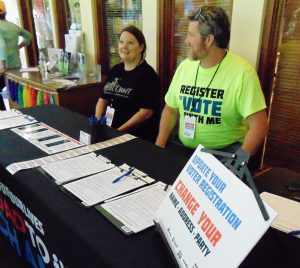 Just inside the main entrance to the DuPage Unitarian Church was a table for voter registration. Survivors of a Florida high school shooting who appeared in Naperville stressed voting and political involvement to help gain gun reforms and controls. (Photo by Jack McCarthy / Chronicle Media)

Seventeen people — including 14 students — were killed and 17 more were injured as a 19-year-old former student went on a six-minute Valentine’s Day shooting spree shortly before school was dismissed for the day.

The assailant, 19-year-old Nikolas Cruz, remains in custody. Prosecutors announced they plan to seek the death penalty for Cruz.

The shootings galvanized Stoneman Douglas students and peers around the country to march, register to vote and demand legislative solutions.

“We live in in a country that suffers from an astronomical amount of gun violence,” Deitsch said. “It affected my home community and it affects communities around the country every single day.”

In March, an estimated 840 March for Our Lives rallies around the world drew hundreds of thousands of participants, including tens of thousands in Washington, D.C.

The current bus tour is a lower key follow-up, but still designed to encourage and inspire students and young adults to take action.

Admission to the 200-seat sanctuary was mostly limited to people ages 25-and-under while adults could view a video feed in an adjacent room.

Naperville police and a private firm helped provide security and only persons with tickets secured in advance were admitted.

The initial Midwest tour continued with a Sunday stop in St. Louis followed by scheduled visits to Kansas City,Kan., Omaha, Neb., plus stops in Iowa, Wisconsin, Minnesota and North Dakota through the end of June.