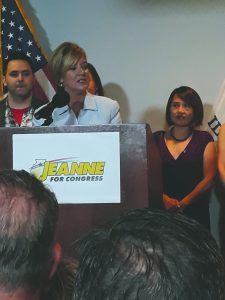 Less than 30 seconds into her candidacy announcement Sunday night at Cantigny Park in Wheaton, Ives said she and Casten view freedom differently.

“The question before us today is whether our freedom is the source of problems in America as Rep. Sean Casten believes or the solution to our problems as I believe,” Ives said.

The Wheaton resident would later say Casten is not a reasonable person and called him a “reckless, spiteful demagogue.”

Despite having at least one Republican primary opponent, former Lt. Gov. and fellow Wheaton resident Evelyn Sanguinetti, Ives said she is not concerned about the primary, former Gov. Bruce Rauner’s running mate or money that the former governor or his connections could throw behind Sanguinetti.

“We’re not worried about competing (money-wise) at all in the primary, quite frankly,” Ives said in a Chronicle interview following her announcement. “We think that people in this district already understand my opponent, what her record is and who she stood by and they rejected that in the (2018 gubernatorial) primary and they’ll reject it again. So we’re very confident.”

She said that Casten is “absolutely wrong for the district,” saying his policy positions are 180 degrees from where 6th District residents are.

“People in this district like the health care that they get from their employers. He’s for Medicare for all,” Ives said. “… He’s so wrong on so many policy levels that it’s really embarrassing at this point.”

Ives noted that she has the backing of former 6th District Republican Congressman Peter Roskam and his wife, Elizabeth.