Along with annual Memorial Day parades and observances, many communities also have permanent monuments and plazas saluting the nation’s fallen like this one in downtown Oswego. (Photo by Jack McCarthy / Chronicle Media)

The observance of Memorial Day, which dates back to post-Civil War days, is both somber and celebratory.

Memorial Day, originally known as Decoration Day and observed on May 30, was switched by Congress in 1971 to the fourth Monday in May to create a three-day weekend holiday.

It’s still a day of parades, speeches and remembrances of the nation’s war dead. But it has also evolved into a day saluting all veterans as well as a perfect time for family gatherings and outdoor cookouts.

It typically falls at the end of the school year, so Memorial Day also serves as an unofficial kickoff to summer.

Here’s a rundown of west and northwest suburban Memorial Day parades and services:

Memorial Day Parade, noon, May 27.  The City of Aurora’s annual Memorial Day Parade will begin at the intersection of Benton and River, head east on Benton, north on Broadway, west on Downer Place and end at River Street.

Memorial Day Activities, Monday, May 27.  Memorial Day activities will begin at 8:45 a.m. with a Catholic Mass along with a combined color guard, rifle salute, and the playing of Taps at Mount Hope Cemetery, 1001 Villa St.   At 9:15 a.m., a service to honor those buried at Lakewood Memorial Park located at 30 W730 US 20 will be held at the cemetery’s Garden of Honor and include a combined color guard.

Memorial Day Parade and Ceremony, 9:30 a.m., May 27.  The 101st Elmhurst Memorial Day parade will step off on York Street.  A Post-Parade Military Ceremony will be held at Wilder Park.

Rifle Salute and Memorial Day Parade. May 27.  The Fox River- Geneva American Legion Post 75 honors those honors those who gave their lives to protect our freedom. A rifle salute will be held at 6 a.m. at the East Side Cemetery off Bennett Street. The parade starts at 10 a.m. near the Geneva Metra Station.

Memorial Day Parade and Service, 9:30 a.m., May 27.  The parade will step off at Bryn Mawr and Catalpa.  A Memorial Day service will follow the parade at Usher Park, courtesy of VFW Post #5167.

Following the parade, there will be a short ceremony at the Memorial and then again at the Lisle Cemetery. A free community picnic will follow on the grounds of The Museums at Lisle Station Park.

Memorial Day Parade, 10 a.m., May 27. Oswego American Legion Post 675 honors those who have fallen with a parade from downtown to the Oswego Township Cemetery. 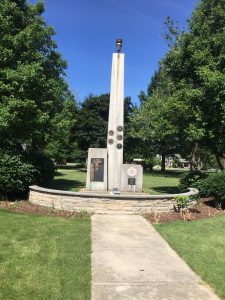 The Yorkville Town Square Memorial includes a perpetual flame that burns in honor of all those who have served in the United States armed forces. (Photo courtesy of city of Yorkville)

Memorial Day Ceremony, 10 a.m., May 27.  On Monday, May 27th, the Plano American Legion Post 395 in conjunction with Plano area businesses, community members and dignitaries will host a Memorial Day celebration.  The ceremony includes a reading of veterans’ names, placing of wreaths, and march to the cemetery.

Memorial Day Parade and Ceremony, 10:30 a.m. The parade steps from Ira Jones Middle School and then travels to Settlers’ Park for a ceremony honoring veterans.

Memorial Day Parade, Flag Ceremony, and Celebration, May 25.  At 6 a.m., the Boy Scouts post colors, present the Honor Guard and an honorary gun salute at Baker Community Center, 101 S. 2nd St. The parade steps off at 6th and Main streets at 10 a.m. A memorial ceremony will follow the parade at the Freedom Shrine. Free lunch for post members and family at Arcada Speakeasy, sponsored by Onesti Entertainment. Free Community Picnic at the Arcada Theatre, 105 E. Main St.

Memorial Day Parade and Ceremony, 10 a.m., May 27.   An opening ceremony will be held at the Sycamore Vets Cub, 121 N California St. The parade will follow at 10:45 a.m. and march to the cemetery where laying of the wreaths will occur at approximately 11:15 a.m.

Memorial Day Remembered. 1:30 p.m., May 27. Kline Creek Farm, 1N 600 County Farm Road.  Observe Memorial Day with a ceremony rooted in the history and traditions of the late 1800s, when the holiday was known as “Decoration Day.”

Memorial Day at Cantigny. 11 a.m., May 27.   Those who served will be remembered at a Memorial Day service at Cantigny Park honoring those who served in the United States Army. A special memorial ceremony will take place at 11:00 AM with the Commanding General of the 1st Infantry Division, Major General John S. Kolasheski. Admission free with paid parking.