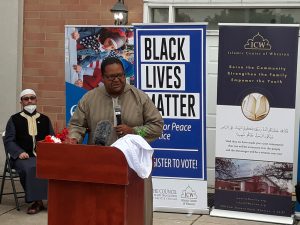 Wearing a jellabiya, Vincent Gaddis, the chairman of the Criminal Justice Committee for the DuPage NAACP, speaks to a gathering Saturday night (June 20) at the Islamic Center of Wheaton during a showing of solidarity for Blacks. He said America still has a long way to go to truly being the land where all men are created equal. (Kevin Beese/Chronicle Media photos)

Although a Christian minister, Vincent Gaddis showed up Saturday night (June 20) outside the Islamic Center of Wheaton for a showing of solidarity wearing a jellabiya.

First joking that he was in the Egyptian robe because “I look good,” he added that he was wearing it because he has made a commitment to learn the history and culture of the Middle East and north Africa region.

“I’m reading the books. I’m reading the texts. I’m eating the food because if I want to stand with my Muslim brothers and sisters, I need to know something about that region and the religion,” said Gaddis, who is a history professor at Benedictine University in Lisle. “I just can’t say, ‘I’m with you’ and then return to my life and do nothing that reflects that I’m with you.”

Gaddis, the chairman of the Criminal Justice Committee for the DuPage NAACP, said there is a need for greater dialogue across religious lines.

He said America has a long way to go to being the land where all men truly are created equal.

U.S. Rep. Sean Casten, D-6th, noted that in 1967 the Kerner Commission Report talked about problems and solutions to national issues after 200 protests were conducted across the United States that summer. 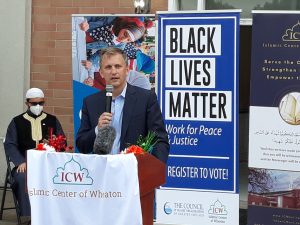 “We’ve had 2,000 protests in the last three weeks,” Casten said, “and these have been protests of every color, every gender, every sexual identity, every religion. It’s been a whole lot of people standing up to fight for Black Lives Matter, to fight for Black people, and to fight that we are going to be true to our founding principles, that we really are going to be the country that stands up for liberty and justice for all. It shouldn’t be just the burden of Black people to defend that. That’s in all of our interests. This is the first time in our history that everybody’s standing up together … There’s something beautiful about all those people rising up.”

He said U.S. House members will head back to Washington and pass the George Floyd Justice in Policing Act, which would ban choke holds, no-knock warrants, and profiling by race or religion; make lynching a federal crime; and start the end of providing military equipment to police forces.

Casten urged those in attendance at the solidarity event to continue to work to change things for the better.

Abraham Antar, one of the founders and president of the Islamic Center of Wheaton, said equality is one of the core values of all Muslims.

“As Muslims, we stand for equality. We stand for justice and we speak loud and clear against injustice and inequality,” Antar said. “We are not shy on speaking on those principals.” 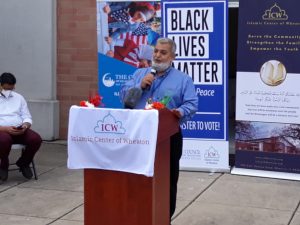 Abraham Antar, one of the founders and president of the Islamic Center of Wheaton, tells individuals at the solidarity event that equality is one of the core values of all Muslims.

He said Saturday night’s event was to stand with all those who have faced injustices in this country.

“We’re here to show support for African Americans, for Latinos, for all disadvantaged people in this society and all across the world,” Antar said. “We stand for justice and we stand for equality.”

He encouraged young people to register to vote, noting that their can express their anger and frustration by picking the next set of rule makers.

“History will be on your side,” Antar told the young people in the audience.

Tariq El-Amin, civic and interfaith engagement director for The Council of Islamic Organization of Greater Chicago, said this is a time to move beyond the rhetoric and conversations, and to use one’s voice to bring about democracy.

He said by voting and participating in the census, people can make a difference in the country’s direction.