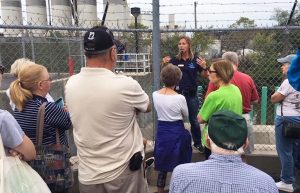 The Chicago Stone Company began excavating limestone from the site between Illinois Route 83 and West Avenue in 1883, a year after the community was incorporated.

For more than a century the quarry’s limestone was used in building construction and crushed for use with roadbeds. Now it serves as a crucial component of DuPage County’s regional flood abatement effort.

Flooding has long been the bane of DuPage County. Elmhurst alone has spent $25.6 million in recent years on storm water control and flood mitigation efforts.

The DuPage County Board took decisive action after 9.4 inches of rain fell in a 24-hour period in August 1987, flooding hundreds of homes and businesses and costing $150 million in damages.

Study began on what would become the Lower Salt Creek Watershed Plan, assessing a creek that starts with a dam in Busse Woods in Cook County and flows through Wood Dale, Itasca, Addison and Villa Park, through Elmhurst, then east to Hinsdale and back to into Cook County at Brookfield.

The State of Illinois approved creation of the DuPage County Stormwater Management committee, comprised of six members of the Du Page County Boards and another six from of the county board’s districts.

In 1992 DuPage County purchased the Chicago Stone Quarry for $64 million. The county installed needed technology, including six nine-foot tall submersible pumps costing $250,000 each, and environmental adaptations required by the US Environmental Protection Agency

The facility then officially opened in 1996.

“I grew up in Elmhurst, so I know exactly what we used to go through here,” Zay said recently before he and Stormwater Management staff hosted a day-long series of tours for 500 people who bought tickets as part of a fundraiser for the Elmhurst Historical Society.

That tour started on the west side of Route 83 between St. Charles Road and North Avenue, along the east bank of Salt Creek.

There, during heavy rain falls, stormwater management staff re-direct water flow from the rising creek through a sluice chute in the large concrete “weir,” or wall, on the creek bank. It flows through the sluice at up to 1,600 cubic feet per minute, to what’s called the “Vortex Drop chute,” which is actually two 10 foot by 10 for boxes that channel the water 80 feet down and into a pipe that shoots the water 400 feet under Route 83 and into the first quarry. 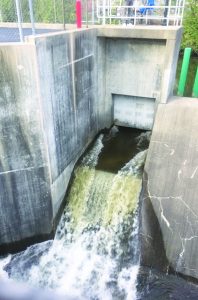 Water from Salt Creek gushes out of a slightly opened sluice gate on its way to two quarry retention area east of Illinois Route 83. The water will fall 80 feet into two 10 foot by 10 foot channels that will carry it 400 feet under Route 83 and into the Elmhurst Quarry.  (Photo by Bill Dwyer / For Chronicle Media)

The quarry’s two huge “lobes” are connected by tall passages cut out of the stone between them. The first lobe is 120 feet deep, the second lobe further east has a 220-foot depth.

The quarry can hold up to 2.7 billion gallons of water, which is slowly pumped back to an aeration facility adjacent to Salt Creek.

Sarah Hunn, Chief Project Engineer for the agency, said that in 2008, the only time the quarry has filled to its 2.7-billion-gallon capacity, it took 72 days to drain the quarry and aerate the stagnant water before returning it to Salt Creek.

Hunn said the warning “trigger” for utilizing the quarry system is in Salt Creek near Harger Road, adjacent to the Oak Brook Shopping Center.

“We have a gauge at Harger Road that we monitor remotely, from home and the office,” Hunn said. “When we see that gauge reach 654 (feet above sea level) we get ready to operate the quarry.”

That remote control capability can be very important, Hunn said. Sometimes staff has plenty of advance warning. And sometimes there is little or none.

“We went from no rain to operating stage within an hour. It was incredible,” Hunn said.

The heavy flood triggering rains have continued, with particularly voluminous downfalls in 2001, 2007, 2008, 2010, 2012 and 2015.  While the quarry system can’t prevent all flooding during such events, Hunn said, it has had a major impact on protecting most structures.

“For the most part, we can mitigate a lot of those flooding effects with this quarry those four times a year (the system is activated),” she said.

“These facilities have become even more important over the years because of the changing climate (and) heavier rains we’re getting,” Zay said. These facilities continue to get even more use than they have in past years.”

Zay praised the foresight of his predecessors on the county board who spent the money required for the quarry system 27 years ago, saying it has paid for itself multiple times over.

“Houses here, businesses around here, are benefitting from this facility,” Zay said. “I think we saved $64 million (in damage) in the first five years, probably.”