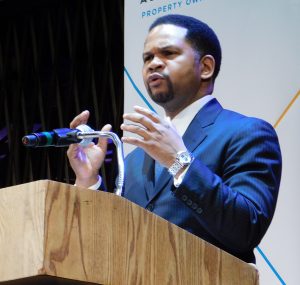 More announcements are expected in the coming weeks, the city said in a statement last week.

“My goal is to always surround myself with proven leaders who are dedicated to their area of endeavor and committed to the betterment of Aurora,” Irvin said. “The Mayor’s Office is just our first step in align-ing positions at City Hall for maximum outcomes across the board.”

Bringing nearly three decades of municipal leadership to the Mayor’s Office, Alexandrou will be respon-sible for the daily operations of the city. He has 17 years of leadership with the city of Aurora, serving under former mayors David Stover, Tom Weisner and Bob O’Connor, most recently serving as chief ad-ministrative services officer.

Previously, Alexandrou served as the city’s risk manager, human resources director and chief labor nego-tiator with the city’s labor unions. Prior to working for the city of Aurora, Alexandrou was with the vil-lage of Oak Park for a decade.

In April, he was elected to serve as a Fox Valley Park District commissioner.

“We are hitting the ground running with a strong leadership team in the Mayor’s Office led by Mayor Irvin. I’m honored the mayor has the confidence in me as the chief management officer as we start to implement Mayor Irvin’s vision for Aurora,” Alexandrou said. “This is just the beginning and our entire team is looking forward to continued progress and excellence.”

Returning to the mayor’s office after a yearlong stint as the city’s director of neighborhood standards is longtime city executive and former alderman Chuck Nelson.

Nelson will fill the current vacant assistant chief of staff position with a new title and duties as the city’s first-ever deputy mayor. As deputy mayor, Nelson will assist the mayor in political endeavors, business outreach, community collaborations and educational initiatives, including leading the charge to establish the city’s new Education Commission.

“Chuck Nelson is synonymous with Aurora,” Irvin said. “He’s a stalwart leader who is respected in all cir-cles. As deputy mayor, he will represent the city on my behalf and help us to successfully implement our action plan for this administration.”

Nelson will also serve as the mayor’s liaison to the Aurora City Council, on which he served as the 4th Ward alderman from 1993 to 2005. He will also handle veterans’ initiatives and serve as the liaison of the Aurora Veterans Advisory Council. Nelson served as Weisner’s assistant chief of staff from 2006 to 2015 when he was asked to head the city’s Neighborhood Standards Department.

The longtime executive assistant to Irvin at the Law Offices of Richard C. Irvin and Associates brings nearly a decade of leadership and knowledge to her new role. She will handle the Mayor’s day-to-day schedule and coordinate special initiatives for Mayor Irvin and the leadership team.

Two experienced Mayor’s Office staffers will remain in place, but with expanded roles in the new admin-istration.

Alex Voigt will continue in her role as assistant chief of staff, a position that she has held since 2015. During her nearly seven years with the city, she has served as executive assistant to the mayor, manage-ment analyst, interim EMA manager and interim city clerk.

Voigt will continue to manage the mayor’s boards and commissions and represent the Mayor’s Office at City Council committee meetings.

Clayton Muhammad will continue as the city’s director of communications, a position he has held since 2013.

As part of Irvin’s goal to expand visibility and publicity for the city, Muhammad and his team will publi-cize the many ongoing initiatives and initiatives of all city departments and auxiliaries, and enhance the city’s community relations and social media initiatives, including regular live updates from Irvin and City Council members.

Initial staff changes began last week during Irvin’s first days in office and will continue through this week. Additional key staff changes are expected to be announced over the next couple of weeks.