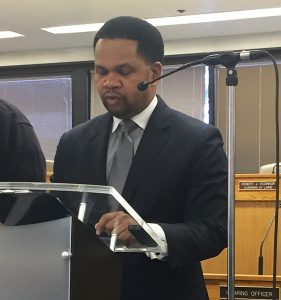 Aurora Mayor Richard C. Irvin announced on Tuesday that the city will use the downtown Aurora Transportation Center as a 24-hour warming center as bone-bone-chilling cold arrives. He also said City Hall will be closed, non-essential city services will be suspended until mid-day Thursday. (Photo by Jack McCarthy / Chronicle Media)

The state’s second-largest city will take extra steps to ensure the safety and well-being of citizens as bone-chilling cold descends on the region.

With temperatures expected to fall to -23 with wind chills as low as -55 degrees by early Wednesday morning, the City of Aurora will convert the downtown Aurora Transportation Center, 233 N. Broadway, into a 24-hour warming center.

“Due to the dangerous cold, we have taken several steps to ensure the health and safety of our residents,” said Mayor Richard Irvin during a media availability on Tuesday, Jan. 29.

“We will open a 24-hour emergency warming center at the Aurora Transportation Center,” Irvin said. “It will remain open until Thursday at noon. We encourage anyone in need to come to the train station and we ask our community to help spread the word about its availability.

“We will (also) be closing City Hall and non-essential city services tomorrow (Wednesday, Jan. 30) and for the morning of Thursday (Jan. 31),” he added. “We will reopen City Hall at noon on Thursday.”

The city’s other commuter rail station at Illinois Route 59 will also serve as a warming site but will close following the departure of the final Burlington Northern Santa Fe commuter train.

It’s the second weather challenge the city and northern Illinois has experienced in recent days.

“We have gone from crippling snowstorms to arctic cold in just a couple of days,” Irvin said. “The Aurora snow team and our contractors have worked diligently to clear streets and will continue to do so.”

Area school districts and colleges will also be closed and garbage pickup has been suspended for the next two days.

Temperatures are expected to remain below zero on Thursday and rise to a high of around 20 on Friday. The weekend forecast calls for temperatures in the 40s and a high of 48 by Monday.

Check back at chronicleillinois.com for a list of other area warming centers and updated reports on closures and the cold.