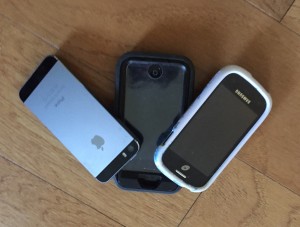 State Rep. Stephanie Kifowit, D-Oswego, is working with Mutual Ground in Aurora in coordinating a cell phone collection and resale program that brings in much-needed help and funds to the social service agency. (Chronicle photo)

That old cell phone stealing space in your junk drawer may not be of use to you, but to domestic violence victims at Mutual Ground in Aurora, the now defunct technology could be the lifeline that saves them.

At a time when budget cuts throughout the state have affected social service programs, Meyers said every penny generated by the cell phone resales goes to help those seeking services through Mutual Ground, one of the state’s largest and oldest domestic violence and sexual assault agencies.

To State Rep. Stephanie Kifowit, D-Oswego, hosting a cell phone drive has afforded her the opportunity to give back.

“I’ve been (collecting phones) for a few years now, and we’ve collected more than 500 phones for them,” Kifowit said. “Every little bit helps.”

The old phones are either refurbished and distributed to domestic violence victims, or sold for money, which is then used to provide additional services to victims.

“These days, most of our clients already have access to inexpensive or free cell phone services, so the need to (hand out donated phones) has diminished somewhat,” Meyers said. Still, the money collected from the sale of old phones goes to funding underfunded resources.

“Right now with the state’s budget crisis, every bit helps,” Kifowit said when discussing her desire to start her phone drive. “We really need to step and and help the nonprofits in our community.”

Since 2002, when Mutual Ground began accepting cell phone donations, more that $19,300 has been raised as a result of the initiative, Meyers said

“We are so incredibly grateful for Rep. Kifowit’s years of dedicated support of victims of these crimes,” Meyers said.

This past year, Kifowit said she has also worked on other initiatives to help victims of abuse. She said she’s done this by supporting a new law that give domestic violence victims more time in paying start up fees for utilities.

She has also sponsored legislation which would give prosecutors more time to bring rapists to justice.

“It’s really tough,” she said. “We definitely need to make sure that people who are guilty are held accountable for their actions.”

She said it’s not a victim’s fault if the investigative process is slow.

“I was horrified to learn about the backlog of rape kit testing that exists in communities across the United States, and I wanted to prevent rapists from escaping justice here in Illinois,” Kifowit said. “We must do everything in our power to protect those who have been victimized and work to ensure dangerous criminals are prevented from causing more harm.”

hed:  How to get involved

To find out more about initiatives to aid domestic violence victims and rape victims, contact State Rep. Stephanie Kifowit’s constituent service office by phone at (630) 585-1308, by email at Stephanie.Kifowit@att.net, or by visiting www.ILDistrict84.com.

Those interested in donating their time or other resources can reach Mutual Ground at (630) 897-0084.