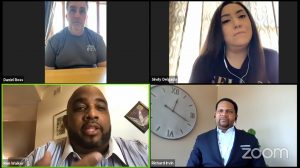 Clockwise from upper left are COVID-19 survivors Daniel Ross, Sindy Delgado, Aurora Mayor Richard Irvin and Ron Walker. They talked about their COVID-19 illnesses and recoveries during a May 6 video conference. (Photo of Zoom teleconference by Jack McCarthy / Chronicle Media)

Ron Walker was weakened and wary when he emerged from the worst of his recent battle with COVID-19, unsure whether medical professionals treating him were friends or foes.

“I completely lost memory of everything except my name and date of birth,” said Walker of a recent 28-day hospitalization, including 10 days on a ventilator. “When I came out of a coma,  I thought that these hospital workers were out to get me … . One of the thoughts I had was that (my wife) had abandoned me to these crazy people.

Walker, a 51-year-old Aurora resident, is now almost fully recovered. He was one of three participants in a May 6 COVID-19 video conference on recovery from a virus that has infected tens of thousands and killed nearly 3,000 in Illinois.

The Facebook Live teleconference was hosted by Aurora Mayor Richard Irvin, also a victim of a virus that recently left him sidelined and seriously ill. It was the latest in a series of online COVID-19 conferences sponsored by the city.

“I contracted COVID-19 in March and it was a tough battle where I went to the edge and back,” Irvin said. “Since my recovery, I’ve met so many Aurorans (who) have battled COVID just like I did and so many want to share their stories. Fortunately we have many recoveries and these are stories of hope and healing.”

Irvin was never hospitalized and is back in good health. But two others on the call — Daniel Ross and Sindy Delgado — did spend time in medical facilities.

They’re among more than 1,100 Aurora residents who have contracted the virus.

“For three to four days I was just trying to tough it out, gut it out,” Ross said. “(I was) feeling fatigue, fever, chills.

“(Then) I couldn’t breathe. I went to the hospital and they told me I had pneumonia in both lungs … and they sent me home. I still couldn’t breathe and I went back a few hours later and a couple of days later they put me in a coma because I had COVID-19.”

The  50-year-old father of three and grandfather of one, spent nine days on a ventilator.

“Where (did I) get it from? Maybe the gas station where I stopped to fill up,” Ross said. “But I’m pretty confident it was work. We were wiping down things with Lysol and Clorox wipes and we were trying to do the right thing. But it wasn’t enough.”

Delgado, a 32-year-old mother of four and 30-year Aurora resident, was also hospitalized but never needed a ventilator. She said she was sick for “two-three weeks” and exhibited a variety of symptoms.

“I had high fevers, I had chills,” she said. “I would wake up in the middle of the night and I had to change shirts because I would be really wet from all the sweating. My feet were really cold as well and I also had a cough. I also had headaches and then I lost taste of the food, I lost the smell, I couldn’t eat and had vomiting as well.”

Along with medical personnel, Delgado also relied on her family for help.

“My kids and my husband were always here and always looking out for me,” she said.

While Delgado never needed a ventilator during her hospitalization, she did receive oxygen to aid in breathing.

Walker, married nearly a year and the father of five from a previous marriage, said he initially disagreed with his wife about going to the hospital.

He had developed COVID-19 symptoms over several days in late March — including persistent high fever plus oxygen and heart rates that were “in bad shape.” He was admitted to Rush Copley Medical Center on March 24.

“Going to the hospital probably saved my life,” Walker said. “I didn’t know I was on a ventilator for 10 days until after I came through it,” he said.

“When I was on the ventilator my wife tested positive as well,” he said. “Of course I didn’t know that because I was out of it. My sons, they all had symptoms — cold symptoms. … (But) we’re all good and healthy right now.”

How the coronavirus is exactly acquired remains a mystery. But reinforcing policies of social distancing, wearing masks, testing and contact tracing are strategies that help stop transmissions.

Suffering through COVID-19 also prompted each to take a step back to consider more important things in life like family.

“It’s amazing the things we take for granted,” Walker said. “There are so many joys and things to appreciate in life.”