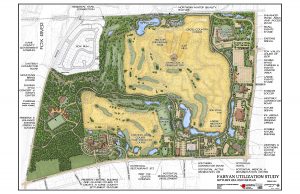 A cross country course set atop a one-time Geneva landfill will not only be state of the art facility, it will also be unique according to a county officials.

Years in the making, the planned course at Settler’s Hill Landfill aims to become a mecca for cross country enthusiasts in the region.

It was approved last week by the Kane County Board.

Ken Anderson, director of Kane County’s Division of Environmental and Water Resources, calls the planned $2.9 million course “one of a kind.”

Scheduled for completion by fall 2019, just in time for high school cross country seasons, the course will allow spectators to view a race from start to finish.

“Sometimes during cross country races, spectators will see a runner at the start of the race and they will go off into the woods and you won’t see them again until the end of the race,” Anderson said.

The course won’t be limited to high school runners.

“We are building it based on NCAA standards, so that a collegiate event can be held here,” Anderson said.

Events are  expected to include high school and college meets and fun runs and have a variety of courses to choose from.

The county sought input from USA Track and Field, the sport’s governing body, so that the facility would be  designed to have the ability to host races ranging from two-to-10 kilometers.

“Having a standardized course that you can run year after year is a plus– one that is conveniently located is especially advantageous,” said Carius, who has been coaching at North Central for 52 years and has 17 NCAA national titles.

Years ago golf courses would allow cross country races to be run on their facilities—something that doesn’t occur much today. Most cross country meets are now held in parks, forest preserves, and on school grounds.

The Settler’s Hill facility also will be equipped with restrooms, vendor space and adequate parking for large events, Anderson said.  Other expected amenities include a scoreboard for the top runners and their times and a public address system.

When not hosting events, residents can use the track to walk to the top of the landfill, Anderson said.

“There are gorgeous views from the top,” Anderson added. “On clear day visitors can see the Chicago skyline, Byron Nuclear plant, and the Fox River.”

The addition of the cross country course will add to an already bustling sporting hub that includes the Northwestern Medicine Field, home to the Kane County Cougars, the Fox Valley Ice Arena, and a Kane County Forest Preserve golf course.

The Settler’s Hill Landfill operated from 1982 and was a primary waste disposal site for Kane, DuPage, and western Cook counties before closing in 2006.

The landfill is owned by Kane County. Waste Management of Illinois is responsible for the environmental management and monitoring of the landfill site.

When Settler’s Hill landfill was closed in 2006, several uses for the land were proposed.

Anderson said, “About six years ago, a cross country course was suggested.”

The completion date will be dependent upon the amount of fill that is brought to the landfill.

Anderson explained that the fill is needed to complete the cross country track.

However, he added, the county is being paid to have the fill deposited on the landfill.

“This will help offset some of the cost of the project,” Anderson said.