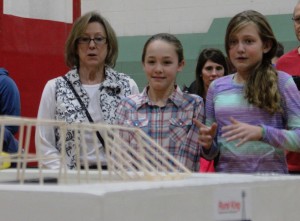 Members of Oswego’s  Thompson Junior High School team watch as their entry is tested during the Fourth Annual 4-H Bridge Busting Competition on Saturday, Jan. 9.  The team finished second for the Aesthetics Awards in the middle school division. (Photo courtesy of University of Illinois Extension)

Students, families, 4-Hers and residents from DuPage, Kane and Kendall counties put their engineering skills to the test in the Fourth Annual 4-H Bridge Busting Competition on Saturday, Jan. 9.

Two families, one from Plano and one from Aurora, claimed the overall top prizes in Aesthetics and Structural Efficiency, and several other local teams placed in the top three in their divisions.

In all, more than 25 teams competed in this year’s competition sponsored by 4-H Youth Development through University of Illinois Extension, and partners Rural King of Plano and Fox Valley Family YMCA.

“We had another successful year of tough structural competition and many creative designs,” said Jo Ann Britton, 4-H Youth Development Program Coordinator with University of Illinois Extension. “The Bridge Busting Competition provides area youth and families with a unique way to challenge their brains, work together and learn about engineering principles, all while having fun.”

Aesthetics is judged on provided specifications, quality of craftsmanship, sound structural design and originality. Structural efficiency is determined by a calculation based on maximum weight supported and the weight of the bridge.

The Gugala family team of Plano earned the Overall Aesthetics prize, following their victory in the Family Division. The team was represented by Steve Gugala and his son Jacob.

The Overall Structural Efficiency Award went to the Schultz family team of Aurora, who also won the same title in the Family Division. The team included Ryan Schultz and his children Andrew and Anika. The team’s bridge held more than 31 pounds with a total rating of 419.283.

During the judging, attendees and teams learned about real-world projects in construction, design and engineering from Yorkville-native Chris Erickson, a senior project manager with Power Construction, and Kyle M. Pearl, a bridge engineer at AECOM.

The full results of the 2016 Bridge Bust are as follows: 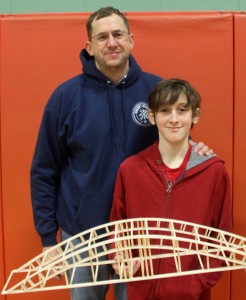 Steve Gugala and his son Jacob from Plano took won not only the Family Division but also took home the Overall Aesthetics prize in the Fourth Annual 4-H Bridge Busting Competition on Saturday, Jan. 9.   (Photo courtesy of University of Illinois Extension)

“This project and event were awesome,” said Pack 159 leader Michael Sliczniak. “In Scouts, we focus on outdoor skills and patriotism, and this gave us an opportunity to earn our engineering badge in a new way. It took four very long den meetings, but we learned a lot and worked as a team.”

Thompson Junior High School students Isabella Frunzar and Zoe Wareman said they not only learned about bridge design and engineering, but also about planning and time management.

“This project really brings together many skills from start to finish,” said Britton. “It encourages organization, teamwork and communication skills, as well as engineering, physics, math and more.”

During the event, participants and spectators alike also had the opportunity to witness robotics demonstrations, participate in electricity experiments and Arduino technology, and create a DNA-inspired bracelet. The activities were led by 4-H Science Ambassadors, a group middle school and high school students who learn and share STEM (science, technology, engineering and math) projects with their communities.

“We are grateful to our partners, volunteers and guests for making this annual event a great success,” Britton said. “We look forward to the event each year, and enjoy seeing the more than 150 people who come out to participate and watch our Bridge Bust.”

For more information about the event or local 4-H and Youth Development programs, contact your county Extension office, or visit web.extension.illinois.edu/dkk/.