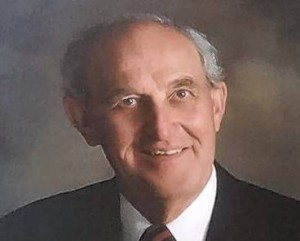 The late Albert McCoy, 89, the three-term Aurora mayor remembered as a visionary who helped the city prosper, has died.

McCoy died peacefully in his Aurora home on March 26. He was born June 25, 1926, in Aurora, the son of Denis and Katherine (Longbein) McCoy, according to his obituary on The Healy Chapel website.

He attended St. Mary’s Catholic grade school and graduated from Marmion Academy, class of 1944. He lived in the city of Aurora his entire life except for his military service and college years.

McCoy was a combat veteran of World War II, serving as a signalman in the U.S. Navy aboard the aircraft carrier USS Monterey in the South Pacific. He participated in the Battle of Okinawa, the Japan main island campaigns, and was present with the Third Fleet in Tokyo Bay during the surrender of Japan on Sept. 2, 1945. He received five battle stars for his service during World War II.

After the war, he returned to Aurora and attended Aurora University. He then received a football scholarship to the University of Montana, where he also was a member of the baseball team. McCoy remained active in sports his entire life and served as a college football referee for 21 years. After college, he returned home and served as the assistant controller of R&M Kaufmann in downtown Aurora, where he met his wife of 53 years, Mary Ann.

In 1965, at the age of 38, he was elected mayor of the city of Aurora. He served three terms as mayor from 1965 to 1977. During his tenure as mayor, Aurora annexed 6,800 acres of land, which gave rise to Aurora’s current distinction as the second largest city in Illinois.

After leaving the office of mayor, McCoy served as chairman of the Illinois Liquor Control Commission from 1977-98. He was also a vice president of the Old Second National Bank in Aurora for 14 years. He worked his entire adult life until retirement in downtown Aurora.

McCoy was active in numerous local civic and charitable organizations during his life. He was a member of Holy Angels Parish for more than 50 years and served as a lector for 28 years. He was a member of the Serra Club of Aurora for 25 years, received the Marmion Centurion Award, and was the fourth recipient of the Marmion Ad Regnum Dei Award in recognition of exceptional public witness and service of Gospel values for the kingdom of God.

“McCoy was a self-reliant man, taking care of himself and his entire family right up until his final days. He was a giver in the truest sense of the word, always putting the well being of others before himself. He will be deeply missed by all who had the great fortune to know him,” his obituary says.

Survivors include his son, former Kane County Board Chairman Mike (Vicki) McCoy of Aurora; his daughter Cara (John) Gibbons of Henderson, NV; five grandchildren, Joe, Mark, and Kate McCoy and Elizabeth and Sarah Gibbons; as well as many nieces and nephews.

In addition to his parents, Al was preceded in death by his wife Mary Ann (Malmborg) McCoy; a brother Gerald (Betty) McCoy and a sister Alice (Clyde) Hess.