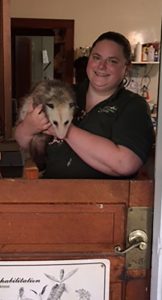 The Elburn-based center is currently a temporary home for approximately 300 animals, according to Laura Kirk, director of animal control.

Animals are dropped off at the center by people from all over Kane County and surrounding areas to receive care before they are released back into the wild, Kirk said.

“People will come to the door, we’ll take in the animals, they’ll go into an incubator until we’re able to examine them,” Kirk said. “And then from there they’ll go into wherever they are going so our mammal room, our bird room, outside, cages downstairs.”

Kirk estimated that they help approximately 3,000 animals a year with spring and early summer being their busiest season.

Most animal species have their babies in the spring so the Wildlife Center sees a large influx in the number of orphaned babies that are dropped off. She said that they get busy again briefly in the fall because squirrels give birth to their babies at that time.

These babies will be fed and cared for by volunteers, interns and staff that dedicate their time to helping animals. Once the babies are old enough to fend for themselves in the wild, they are released back into their natural habitat.

Kirk said the center also receives abandoned bird eggs that they place in incubators to keep warm until they are ready to hatch. Kirk said they received a whole nest of abandoned duck eggs earlier in the year that were adopted and taken care of by a wild turkey that lives at the center.

“We decided to see if she would sit on duck eggs and she did and she hatched them and now she has nine baby ducks,” Kirk said.

The center also serves as an animal hospital for sick or injured animals.

Kirk said that most injuries occur through being hit by cars or other kinds of harmful human interactions. An estimated 90 percent of the injured animals that are left in their care have been hurt due to human causes. She said they recently took in a turtle with a cracked shell that was hit by a car.

“Luckily their shells can heal. So we’re just going to give him time, keep it clean until it does heal. We do get some that are very severe that can’t be fixed so unfortunately those ones do have to be euthanized,” Kirk said.

Animals are also commonly injured from being attacked by people’s pets, primarily cats and dogs. Kirk said that water-dwelling animals often get caught in people’s fishing line and can suffer severe injuries. She said that she has seen multiple cases where animals’ limbs have self-amputated because the fishing line became so tightly wound. This is a result of humans carelessly leaving fishing line in the water instead of disposing of it properly, Kirk said.

The most important thing for people to remember is to try to live in harmony with the wildlife around them and to remember that this is just as much their home as it is ours. Kirk said that humans sometimes think that they are helping wildlife when, in reality, they may be interfering too much.

Kirk said that people should “… help when [they] can and know when it’s best not to intervene.”

For example, Kirk said that people often find baby animals around their house and assume that it has been abandoned by its mother when this may not always be the case. Because of this, many animals are unnecessarily separated from their mothers. Kirk said that people should try to return the babies that they find to their mothers before bringing them into an animal hospital.

It is commonly believed that if humans touch a baby animal, their mother will smell the human scent on them and abandon their baby. But this is actually a myth and that people should try to educate themselves further on the proper way to handle situations concerning wildlife.

According to Kirk, the Fox Valley Wildlife Center hosts multiple events during the year to raise money and awareness about wildlife conservation. In early March, there is a dinner auction which is the organization’s largest fundraiser of the year, Kirk said.

Also in the spring, they host a Wild Animal Baby Shower event where people can come and play animal-themed baby shower games and learn about different species of animals. To attend this event, people must bring one item from the Center’s wish list – a compilation of needed items that can be found on their website. The Wild Animal Baby Shower is the center’s way to get all of their supplies for the year.

In the fall, they host an open house where they are temporarily open to the public to show people the important work that they are doing.

Around the same time, they hold their annual Wild about Wildlife fundraiser at Hickory Knolls Discovery Center in St. Charles. For this event, Fox Valley Wildlife Center invites speakers from zoos and other wildlife organizations to give a series of presentations about wild animals. Kirk said they even bring some of their animals along.

In addition to these events, Kirk said they host many different, smaller fundraisers throughout the year. The proceeds from the merchandise that they sell from their website goes to supporting the animals that they care for, according to Kirk. They also host fundraising givebacks with local restaurants where a portion of the food purchased at the restaurant on a certain night is given to the Center, Kirk said. Their next giveback will take place during the month of June at local Buffalo Wild Wings restaurants, Kirk said.

Kirk said they are currently looking to hire a talented grant writer to help them secure more funding.

The center has four year-round staff members and five seasonal staff members that come during the spring and early summer when they get busier, Kirk said.

They also have about 20 unpaid interns, typically students going to school for animal care-related careers although positions are open to anyone interested. Kirk said they have approximately 60 volunteers that help out with everything from cleaning cages to caring for animals.

“We rely heavily on our volunteers since we do have a limited amount of staff,” Kirk said.

For more information about the center, volunteer opportunities or to donate visit www.fvwc.org.

Video: A day at the Fox Valley Wildlife Center