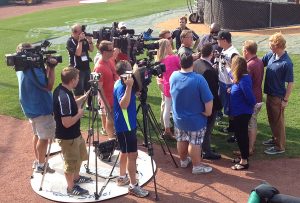 Reporters gather at home plate at Geneva’s Elfstrom Stadium to interview rookie catcher Kyle Schwarber, during his brief assignment with the Kane County Cougars in 2014. Schwarber, who went on to become a Chicago Cubs star, is among 180 former Cougars to reach baseball’s big leagues. (Kane County Cougars photo)

The Kane County Cougars will no longer be affiliated with a Major League Baseball team for the first time since 1991.

But the Geneva-based Cougars — long the Chicago area’s lone MLB-affiliated franchise and a mainstay of the Class A Midwest League — insist they will remain in the baseball business.

Kane County, most recently part of the National League’s Arizona Diamondbacks system, saw that affiliation severed with the Dec. 9 announcement of a revamped minor league baseball system that cuts back the number of teams.

For the Cougars and 40 teams slashed from the MLB development system the 2021 season may now feature a looser association with an unspecified MLB “partner” league.

“We look forward to continuing to provide a quality baseball experience for our fans as well as the awesome, family-friendly, affordable entertainment, in a safe and secure environment, that they have become accustomed to over the past 30 years,” said Curtis Haug, Cougars vice president and general manager in a Dec. 9 statement.

Two other Midwest League teams from Iowa — Burlington and Clinton — are also now without MLB affiliations.

There will be no changes for a pair of other notable Midwest League teams. The Peoria Chiefs will remain as a Class A St. Louis Cardinals affiliate while South Bend, Ind. stays with the Chicago Cubs.

The Midwest League, a 16-team association from seven states, is the entry level of MLB’s player development system. The parent club traditionally supplies managers, coaches and on-field personnel, offering players the potential to work their way up through Class AA, Class AAA and to the parent club.

Non-baseball staffers employed by the local team typically handles all other operations from ticket sales and food service to stadium maintenance and other essential tasks.

A total of 180 former Cougars have reached the big leagues, with representatives on every MLB team.

“It’s been our pleasure to provide a great atmosphere to develop young players for six different major league organizations over the past 30 years,” Haug said. “Beautiful Northwestern Medicine Field (formerly Elfstrom Stadium) provided a central location for Midwest League travel, proximity to two major airports and a passionate fan base, which have served these clubs well.”

More details, including a partner league and schedule, will be announced at a later date. In the meantime, the Cougars plan to remain an active community partner.

“We will continue to contribute to our local communities both through the charitable efforts of the Kane County Cougars Baseball Foundation and by providing employment opportunities for hundreds of local residents each summer,” said owner Dr. Bob Froehlich in the statement.