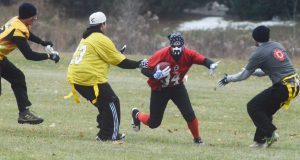 The Sears store at Oakbrook Center might survive the company’s bankruptcy plans. It is one of 11 locations in Illinois that Sears Holdings Corp. hopes to sell to a bidder willing to continue the retail business. The 11 are among a total of 505 stores the bankrupt retailer hopes to sell to a new owner.

The other stores are in Bloomingdale, Chicago Ridge, North Riverside, Schaumburg, West Dundee, Cherry Valley, Peoria and Fairview Heights and Kmarts in Bridgeview and Des Plaines.

Sears has until Dec. 15 to find an initial bidder, or “stalking horse,” for the stores it hopes to keep open.

Other potential buyers have until Dec. 28 to submit bids, and the auction will be conducted Jan. 14.

Christine Martin has asked family and friends for gifts for her 52nd birthday next week, but not for herself.

Instead of traditional gifts of jewelry, clothes and other items, the Aurora resident is raising $200 for Tusonge Ministries, an orphanage and chicken farm in Uganda.

Martin, former secretary at Fourth Street United Methodist Church in Aurora, hosted a Tusonge touring youth choir and chaperones when they performed a concert at the church during a national tour a few years ago.

Since then, Martin has coordinated annual donations from church members to support the Uganda ministry. She created a “ChickCan” receptacle to recycle aluminum soda cans for donations to Tusonge. Donations can be sent to Martin, 1715 Lily St., Aurora, IL, 60505.

Even the biggest ideas can have small beginnings. During the 1999-2000 school year at Fremd High School in Palatine a high school art exhibition forced student artists to work within the parameters of a less than ordinary dimension.

More work could be shown, more schools could participate, and more ideas could be born. Emeritus Department Chair Len Upin felt that the challenge was set and the 4×5 was born.

From the spring of 2000 to the spring of 2012 the Chicago Area 4×5 Art Exhibition grew from 12 participating schools to over 40 spanning to schools from  Waukegan to Gurnee to Lombard to the South Side of Chicago.

The late Lew Hubbard and the staff of Fremd High School continued to develop, from Upin’s vision, an exhibition that consistently showcased over 1000 pieces in one year surpassing most Chicago galleries in quantity and grandeur.

Unemployment rates increase in most regions

Unemployment rates increased over-the-year in October in 12 of Illinois’s metropolitan areas and decreased in two, according to preliminary data released recently by the U.S. Bureau of Labor Statistics (BLS) and the Illinois Department of Employment Security (IDES).

But data also show non-farm jobs increased in 10 of the metropolitan areas.

“The unemployment rate increased over the year in most metro areas across the state,” said IDES Director Jeff Mays. “The increases were mostly due to more people reentering the job market and not immediately securing a job.”

The unemployment rate identifies those who are out of work and looking for work and is not tied to collecting unemployment insurance benefits.

The Forest Preserve District of Kane County is 1,465 acres larger — and still growing — thanks to residents’ support of the 2017 land acquisition and preserve-improvement referendum.

In total, more than $19 million of the $50 million referendum proceeds have been invested so far. Roughly 80 percent of referendum funds will go toward land acquisition, with the remaining 20 percent to go toward preserve capital improvements.

With 1,465 new acres, the district is closing in on the goal of acquiring approximately 2,000 to 2,500 additional acres of open space.

“We’re following through on exactly what we said we would do when we put the referendum before the voters last year in April,” said Forest Preserve Commission President Mike Kenyon. “We’ve added 1,465 acres and have other acquisitions in the works. We’ve also begun work on key capital improvements that will improve habitat for wildlife and recreational amenities for the public. It’s great to see. I’ve often said that the referendum was about legacy and leaving Kane County a better place for future generations. We’re working to do just that,” he said.

An Aurora woman faces a felony domestic battery charge for biting off the ear of a person in her household.

According to Aurora police, Mendoza and the victim were watching TV Sunday evening when a disagreement began. Mendoza then bit off the victim’s right ear. The victim went to a local hospital, where personnel notified police.

Fox Valley Older Adult Services (FVOAS) will be the recipients of proceeds from fundraisers sponsored by Essential Bed and Mid-Day Play.

This event is sponsored by the famous Essential Bed Co. Bring a non-perishable food item for the Franklin Mall Project and Essential Bed will pay for your sales tax. These quality pillows make great gifts.

Bring your pooch to FVCC on Saturday Dec. 8 from 12-3 p.m. and have a picture taken with Santa, just in time for the Holidays.