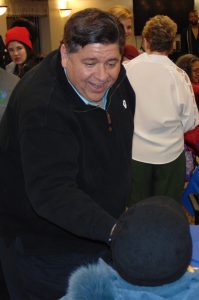 Illinois Gov.-elect J.B. Pritzker wrapped up a “Day of Service”with a stop at Aurora’s LSSI Senior Residences late on Saturday, Jan. 12. He was scheduled to be inaugurated as governor on Monday. in Springfield (Photo by Jack McCarthy / Chronicle Media

The Kane County Health Department is starting a campaign to “Spread Fun, Not Flu,” following the news of the first Kane County pediatric death of the flu season.

“Even healthy kids of any age can get seriously sick from the flu,” Kane County Health Department Executive Director Barb Jeffers said. “Everyone 6 months of age and older should get a flu vaccine every year.”

Vaccination is particularly important for people who are at high risk of serious complications from influenza, Jeffers said.

Severe flu outcomes are a somber reminder of how serious flu can be, even for otherwise healthy people. Flu vaccination protects against flu illness and reduces the risk of flu complications, including flu-associated hospitalization, admissions to the intensive care unit, and even death in children.

According to the Centers For Disease Control, seven pediatric deaths have been reported so far this season — including the one in Kane County.

“It’s too soon to make any assessment about this season’s severity,” the CDC says in its most recent report. “However, since this H1N1 virus emerged in 2009, it has been associated with significant illness and severe illness among young children.”

Last flu season was record-breaking for pediatric deaths, with 185 reported to CDC.

Montgomery Police responded to Rosati’s Pizza Pub, 2000 block of Orchard Road, at 10:32 p.m. on Jan. 6 after 911 calls came in reporting a fight in progress involving weapons. When officers arrived, they learned that two people had been shot while inside the restaurant.

Both victims were taken to Rush-Copley Medical in Aurora where they were treated for non-life threatening injuries and released.

According to Montgomery Police, an argument had allegedly taken place inside the restaurant and an unidentified man pulled out a firearm and began shooting. There is no suspect in custody as of Jan. 10 and no suspect description has been provided by police.

However, police said preliminary information suggests the shooting was targeted, and not a random act of violence. They believe there is no immediate threat to the community.

Investigators are actively working to uncover what circumstances led to the shooting, and to locate their suspect. The Kendall County Major Crimes Task Force is assisting in the investigation.

The day after the shooting occurred, Montgomery Village President Matt Brolley requested an immediate suspension of the location’s liquor license, which the owner agreed to.

The suspension will give all parties a time to review the situation and “if, and under what circumstances, future liquor sales would be appropriate at this location,” Brolley said.

“We have long championed restaurants that offer a safe, family-friendly dining atmosphere, and this type of activity will not be tolerated in our community,” he said.

The restaurant owner and staff have been fully cooperative regarding the investigation.

Police ask anyone who may have information or who was in the area at the time of the shooting to contact police at 630-897-8707. Arrangements can be made for information to be shared privately with police. Anyone wishing to remain anonymous may also submit tips to Crime Stoppers at  630-553-5999.

The Kane County Board Administration Committee has given preliminary approval to allow parking for a women’s march set for Jan. 19 in Geneva.

The general schedule is:

U.S. Rep. Lauren Underwood and state Rep. Karina Villa are expected to speak at the rally, in the parking lot in back of the courthouse.

“(The march) is led by women, but is for everyone,” the Facebook post says. “When women rise, we bring our communities with us, and our march is bringing together people from all backgrounds, faiths, genders, ethnicities, disabilities, sexualities, ages, and immigration statuses to affirm our shared humanity and pronounce our bold message of self-determination and unity.”

Participants are also asked to register for the event on Facebook.

Responding to residents’ questions about the new school funding formula, State Rep. Stephanie Kifowit, D-Oswego is hosting an Education Funding Seminar with guest presenter Ralph Martire, executive director of the Center for Tax and Budget Accountability (“CTBA”), on  Jan. 23 at 6:30 p.m. at the Wheatlands Elementary School, located at 2290 Barrington Dr. W in Aurora.

“After years of inadequate funding, the new funding formula was a step in the right direction towards properly funding our schools,” said Kifowit. “However, there still is a lot more that needs to be done.”

In 2017, the Illinois legislature passed Senate Bill 1947, which creates an improved school funding formula that provides the local schools Kifowit represents with more than $17 million in new state funding. The legislation additionally allows certain school districts to place a property tax cut referendum on the ballot.

Martire is a regular presenter on fiscal matters of the state of Illinois such as budgeting, pensions and school funding and will lead the presentation on the new school funding law.

“Parents, teachers, and community members have the right to understand how public schools are funded and the steps we are taking to properly fund the schools,” said Kifowit.

The museum is temporarily shut down through the first week. Projects included rearranging office and archive space to allow more efficient workspaces for staff and volunteers, uninstalling the World War I exhibit, repacking textiles, finalizing areas in the permanent exhibit, and installing the new temporary exhibit.

Volunteer help is needed in shifts of 2 hours or more through Friday, Feb. 7 from 10am-4pm.  All ages sixth grade and up are welcome.

Shortly before midnight Jan. 1, several Aurora Police Department Special Operations Investigators set up in an area of the city where they expected New Year’s Eve revelers to be shooting guns into the air.

Around midnight, two of the Investigators heard multiple shots being fired around Superior and Ohio streets and were able to narrow down the shots to a home in the 1000 block of Superior Street. They responded to that home in an unmarked vehicle, walked to the backyard and saw Benny Ochoa, 33, of the 300 block of Stuart Avenue, Aurora, among a group of people and allegedly holding a revolver.

When the Investigators announced their presence, and ordered everyone to show their hands, the five complied. When they searched Ochoa, police located two more .40 caliber semi-automatic pistols in his waistband that had already been emptied; as well as a small bag of cocaine in one of his pockets.

The other five people were unarmed. Reports indicate Ochoa fired more than 40 rounds before being caught.

The Investigators secured two felonies through the Kane County State’s Attorney on Ochoa— reckless discharge of a firearm and unlawful possession of a controlled substance.

Aurora police are continuing to investigate the robbery of the Jared’s Jewelry, 1000 block of N. Rt. 59, that occurred on Dec. 21.

Around 7:40 p.m., three men, all of whom had their faces concealed, entered the store. One of the men acted as a lookout while the other two announced the robbery and proceeded to smash two glass display cases.

The pair then grabbed jewelry items from the cases and fled westbound on foot. There were no injuries. The total dollar loss exceeded $340,000.

The suspects were all described as black men wearing dark clothing. One of the men who broke into the display cases was further described as around 6’2”, 240 pounds.

The other was said to be around 5’10” and thin. There was no further description of the man who acted as a lookout.

Anyone with information is asked to call Investigations at 630-256-5500 or Aurora Area Crime Stoppers at 630-892-1000. You can now talk to someone at Crime Stoppers around the clock and if your anonymous tip leads to an arrest, you qualify for a cash reward.

A Shell station at 385 Higgins Road in Gilberts sold a $1 million Powerball ticket in the Dec. 26 drawing.

According to the Illinois Lottery and media reports, the lottery is urging anyone who may have recently bought a Powerball ticket from the Shell gas station to check it to see if they are the lucky winner.

The Shell station owners will receive a $10,000 bonus for selling the winning ticket.

To win the Powerball jackpot, a player must match all five numbers and the Powerball number, according to a news release from the Illinois Lottery.