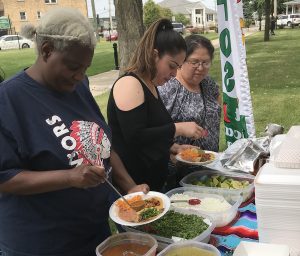 It’s that time of year
The aroma of Mexican food wafted over McCarty Park on Sunday as Aurora Ald. Juany Garza and the Ward 2 Committee hosted the 14th Annual Ice Cream Social. The event includes free tacos and ice cream along with school supplies. The first day of school comes this week for many in Aurora. (Photos by Jack McCarthy / Chronicle Media)

A WalMart in St. Charles was evacuated last Friday morning when someone spotted a masked man entering the store.

The evacuation comes on the heels of mass shootings in El Paso, TX, and Dayton, OH, a panicky exit of Times Square due to a backfiring truck, the evacuation of the USA Today complex in suburban Washington and multiple reports of store evacuations as Americans become anxious and wary of shooting tragedies.

The St. Charles Police Department reported today that police received a call at around 10:09 a.m. saying a masked subject had entered the Wal-Mart at 150 Smith Road.

“It was determined that the subject was wearing a medical device due to recent medical treatment,” St. Charles police Cmdr. Mike Griesbaum said in a news release. “There was no criminal activity involved in the incident.”

Aurora police have arrested a juvenile in connection to the shooting death of a 23-year-old Aurora woman on on Aug. 7.

According to Aurora Police, at 2:15 p.m. on Wednesday, officers were dispatched to reports of a person shot inside a home in the 500 block of South Lasalle Street.

When officers arrived, they found a 23-year-old woman inside suffering from a gunshot wound. Paramedics from the Aurora Fire Department attempted life-saving measures, but the woman was pronounced dead on the scene.

The woman has been identified as Jeanette Luna, 23, of Aurora.

Aurora police detectives responded to begin interviewing potential witnesses, canvas the neighborhood and investigate the circumstances of the incident. APD’s Crime Lab and evidence technicians also responded to the scene to identify and collect forensic evidence from the shooting.

During the course of the investigation, detectives determined that a juvenile male was in possession of a firearm when it was fired inside the home. Shortly after the gun was fired, the juvenile fled the home. He was located by investigators just prior to 9  p.m. at a home in Aurora.

On Wednesday night, detectives met with representatives from the Kane County State Attorney’s Office and the juvenile was charged with Involuntary Manslaughter and Unlawful Use of a Weapon with no firearms identification card.

Illinois law restricts the Police Department from releasing any specific information regarding the juvenile.an

The Elgin Police Department warned the public about “armed and dangerous men” at large following an Aug. 6 parking lot altercation that led to a fatal shooting.

According to Elgin Police, officers responded at around 10:32 a.m. Tuesday to a reported shooting in the 1200 block of Fleetwood Drive. They arrived to find a 24-year-old male subject — identified by the Kane County Coroner’s Office as Joshua Bey, 24, of Elgin — suffering from an apparent gunshot wound. Bey was transported to Presence St. Joseph Hospital, where he was pronounced deceased.

Suspects are identified as brothers Isaiah Butler and Xavier Butler and warrants were issued for their arrests.

A Coroner’s Office autopsy confirmed the cause of death as “multiple gunshot wounds.” Toxicology samples were sent to a lab.

The Elgin Police Department’s preliminary investigation reveals that there was a verbal altercation between a group of subjects in a parking lot. The altercation turned physical, and Bey was ultimately shot.

Detectives from Elgin’s Major and Special Investigations Division responded and are continuing their extensive investigation.

Anyone with information or video that may assist is asked to call 847-289-2600 or to text a tip, send a message to 847411 and include ELGINPD in the beginning of the text, along with the message and/or tip information.

A Fox River Trail bridge, between I-90 and Covey Road in Elgin, will be closed for repairs and bridge replacement through Aug. 30.

Officials said there will be no public access through this stretch of trail during this time. Completion of the repairs is pending weather conditions.

Signs will be placed on the trail to notify the public of the trail closure. The Forest Preserve District asks trail users to exercise caution and be mindful of the closure during this time.

Four new businesses have opened or will be in operation soon in the downtown Aurora area.

PopCulture Gourmet Popcorn was scheduled to hold a soft opening last Saturday in the ground floor of Leland Tower. The popcorn shop will offer 40 different flavors and plans to add vegan flavors as well. Hours are noon to 7 p.m Tuesday through Saturday. Owner Kendall Jackson, of Tinley Park, hopes the store will be the first of several.

The Cotton Seed Creative Exchange, 8 N. Broadway, will hold its grand opening from 5 to 9 p.m. on Sept. 6 during First Fridays. The store features a mixture of home decor, handmade items, DIY products, painted furniture, gift items, and more. Owner Yvonne Thompson is working with a variety of creative partners and vendors and said the store will offer a fun, unique shopping experience.

Warehouse 55, located at 55 S. Lake St., will celebrate its grand opening from 6 to 9 p.m. on Thursday, Sept. 19. Owner Mark Allen, of Mark Allen Inspired, said in marketing materials that the store will feature a unique collection of vintage finds, repurposed furnishings, and many one-of-a-kind accessories.

Charlie’s Silver Spoon Creamery, located at 6 E. Downer Pl. will be opening soon in the restored Silverplate building at the northeast corner of Stolp Avenue. Owners Esther and Mike Saltijeral, of Oswego, purchased the building in 2017. The ice cream is made in-house and an opening date and hours will be announced soon.

For more information on downtown news and happenings, visit www.auroradowntown.org.

The First Division Museum at Cantigny Park will welcome for more than 50 historic military vehicles and their owners on Tuesday, Aug. 20.

The visit is part of a two-day stop in DuPage County during the 2019 Transcontinental Motor Convoy, sponsored by the Military Vehicle Preservation Association (MVPA).

The convoy was scheduled to begin on Aug. 11 in Washington, D.C., and end in San Francisco on Sept. 14. It commemorates the 100th anniversary of the U.S. Army’s first motor convoy across the United States in 1919, along the famed Lincoln Highway.

The restored vehicles will be staged at Cantigny Park from 10 am to 5 pm on Aug. 20.

Visitors are invited to come see them and interact with their owners, most of whom are veterans and collect military vehicles as a hobby. As MVPA members, they enjoy educating the public on the importance of the vehicles during their time in national service.

Truck,” which joined the museum’s fleet in 2018 following a lengthy restoration process. The truck is not in the convoy, but it does run—one of the few models of its kind that still function.

Members of MVPA conduct convoys of various lengths throughout the year. Transcontinental convoys are uncommon and require many local support teams along the 3,200-mile route.

Cantigny is pitching in by donating fuel for each historic vehicle and meals for the owners and their families.

The convoy riders will camp at the DuPage County Fairgrounds for two nights. Those who want to see the vehicles but are unable to visit Cantigny can stop by the fairgrounds on Wednesday,

Man facing prison after convention for theft of rat traps

A Prospect Heights man is facing a prison sentence for stealing a truckload of rat traps from a trucking company.

Kane County Assistant State’s Attorneys Kelli Schmidt and Jake Matekaitis presented evidence that on Sept. 29, 2017, Schwartz, a contract truck driver for J.B. Hunt Transport Services, picked up a truckload of rat traps valued at $27,616 from an Elgin business with instructions to deliver the rat traps to Ohio.

Instead, Schwartz left the traps at the home of an acquaintance in Wauconda, and Schwartz reported to J.B. Hunt that he had delivered the rat traps to the Ohio destination.

Petersen set Schwartz’s next court appearance for 1:30 p.m. Sept. 13  in Courtroom 305 at the Kane County Judicial Center for motions and to set a sentencing date. Schwartz faces a sentence of probation or between six and 30 years’ imprisonment in the Illinois Department of Corrections.