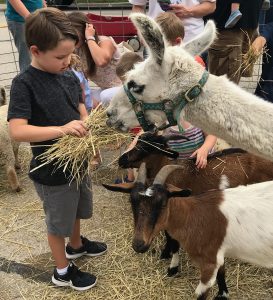 A llama and goats jostle for position as a boy offers a treat of straw during last weekend’s Maple Park Fun Fest. Now in it’s 21st year, the event started as a softball tourney and grew into a full-blown weekend of fun. (Photo by Jack McCarthy / Chronicle Media)

“I take no pleasure in announcing my support for the House to begin an impeachment inquiry into the President of the United States,” the 11th District representative said in a statement last week.

“I have watched with horror as President Trump has perpetrated an assault on American values,” Foster said. “In word and deed, President Trump has demonstrated an utter disregard for the rule of law and the fundamental principles that make up the foundation of our democracy.”

The only Illinois Democrats yet to take a position in favor of a Trump impeachment probe are Rep. Cheri Bustos (D-17) and Rep. Dan Lipinski (D-3).

“Our Constitution vests Congress with the unique obligation to perform oversight of the federal government, including of the President and his administration,” Foster said. “Under our system of checks and balances, no person – not even the President – should be above the law or immune from facing the consequences of their actions.”

According to several reports, more than half of the 235 Democratic member of the House now support impeachment of Trump or an investigation.

Legislation passed by state Rep. Stephanie Kifowit, D-Oswego, to ensure that a student is not questioned or detained by a school resource officer without the presence of their parent, guardian or a mental health professional was recently signed into law.

“I believe it is critically important that we look out for our students’ best interests and mental well-being much more carefully,” said Kifowit. “I understand the need for school resource officers to thoroughly investigate a potential crime or risk, but there needs to be a better appreciation for the student who is facing intense questioning for the first time in their lives.”

Kifowit introduced House Bill 2627 in response to an incident that occurred at a local high school where a student took their own life less than two hours after a school dean and resource officer questioned him using intimidating tactics.

Kifowit’s initiative ensures that a student is not questioned or detained without the presence of their parent, legal guardian or mental health professional.

In addition, if contains provisions that the resource office should be trained in how to interact with children.

Kifowit’s measure passed both the state House and Senate and was signed into law by Gov. J.B. Pritzker.

At 10 a.m. on Tuesday, Sept. 10, the Red Oak Nature Center will present “Animals of Illinois” at the Montgomery Village Hall, 200 N. River St. This program will allow you to meet some of Red Oak’s “animal ambassadors” as staff members share fun facts about their special adaptations that help them to survive.

The event is free and open to the public.

The city of Aurora has closed Heggs Road (Eola Road) to through traffic from Wolf’s Crossing Road to U.S. Route 30 until next spring.

Local access will be available, including the south entrance to Bednarcik Junior High School.

The construction project consists of the removal and replacement of the existing roadway. The newly constructed roadway will be realigned to improve connection at U.S. Route 30, where the new intersection will have traffic signals and relocated approximately 2,000 feet north of the existing intersection.

Route 30 will remain open during construction. However, motorists may experience traffic delays due to the construction and daytime lane closures. Detour routes will be posted.

The project is expected to be completed in the spring of 2020, conditions permitting.

In partnership with the American Legion, the city of Elgin will host its annual Sept. 11 Remembrance Ceremony at 9 a.m. Wednesday, Sept. 11, at the Civic Center Plaza, 150 Dexter Court, located behind City Hall within the Robert Gilliam Municipal Complex.

All are invited to attend this service to remember those in public service who lost their lives and to honor those who continue to serve today.

Seating is limited. Participants may want to consider bringing a chair.

The city of St. Charles is holding a Sept. 11 Remembrance Ceremony at 7:30 a.m. at the Fire Dept. Memorial Monument, 2 E. Main St.

Everyone is invited to come together as a community to honor the first responders who put duty before self and remember those who lost their lives that day.

The Kane County Cougars, minor league affiliate of the Arizona Diamondbacks, have clinched a spot in the 2019 Midwest League Playoffs following an 8-4 victory over the Wisconsin Timber Rattlers last week.

This is the third post-season bid for the Cougars in the last five seasons that they have been teamed up with the Diamondbacks.

Due to a close race between the Cougars and the Clinton LumberKings for the second-half champion, a playoff schedule has yet to be determined. Playoff tickets and parking passes will go on sale once the final standings have been decided.

All tickets, box and reserved, will be sold for $10 with StrikeZone tables behind home plate available for $79. In addition, parking for both the preferred and general lots will be $10.

Playoff tickets will be available online at www.kccougars.com and over the phone by calling the box office at 630-232-8811.