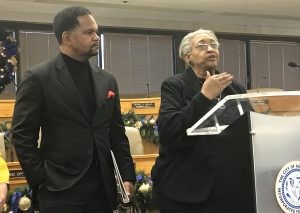 For the second consecutive year, Aurora has been honored in the Illinois State Capitol.

In a ceremony held today (Monday, Nov. 18, 2019) at the Governor’s Mansion in Springfield, the Serve Illinois Commission on Volunteerism and Community Service presented 21 communities with 2019 Governor’s Hometown Awards.

The city of Aurora received the award for the outstanding success of National Night Out 2018.

More than 6,000 Aurora residents joined in celebrating National Night Out last year. Celebrating at 42 event sites, residents enjoyed forming bonds with their neighbors, getting to know their neighborhood police officers, and interacting with city officials on a personal, one-to-one basis. Festivities were organized by 320 volunteers from neighborhoods throughout Aurora, supported by the city’s Neighborhood Group Support Team.

“National Night Out has become an annual tradition in Aurora that shows the power of collaboration, connections and community service,” said Aurora Mayor Richard C. Irvin. “Although it is only one day on the calendar, the event has a ripple effect on our city throughout the year. We have seen an increase in the number of neighborhood groups, community activities and civic engagement because of the energy generated on the first Tuesday of every August during National Night Out.”

Last year, the city of Aurora received the 2018 Governor’s Hometown Award for the “Lighting Up Our Neighborhoods” project, a collaboration with Rebuilding Aurora Together.

The Governor’s Hometown Awards program gives formal recognition to those who contributed to their community’s quality of life through projects that had strong volunteer support, met a need, and made a definitive impact.

Kane County Supervisor of Assessments Mark Armstrong has been named “County Official of the Year” by the Illinois Association of County Officials. The award was presented on Nov. 14 at the association’s fall conference at the Peoria Marriott Pere Marquette Hotel.

Since attaining that position in 2006, he has developed taxpayer presentations on the property tax process and appeal options that have been attended by more than 8,000 citizens, created www.KaneCountyAssessments.org to improve transparency in the assessment process; and created an e-mail notification system for property assessment notices that presently has more than 5,000 subscribers.

He has worked cooperatively with other units of government to develop and annually publish a unified guide to the property tax system and developed a unified web-based property information lookup system, which was used more than 3.3 million times in the past 12 months.

From 2006 to present, assessments have been certified on time and under budget in every year, while reducing staff headcount by 36% during the same period.

Dial 2-1-1 to connect with sources of help

Just as you dial 9-1-1 for emergencies, you can now call 2-1-1 in Kane County and be connected to a live specialist, any time of the day or night, to assist with human service and resource needs.

With more than 1,000 government, nonprofit, and faith-based organizations providing much needed services throughout Kane County, it can be overwhelming and confusing to know who does what and exactly where to start to get help needed. 2-1-1 is a free, centralized, anonymous place to start with a specialist on hand to help sort out the options. No computer or internet is required, translation is available in over 150 languages and callers of all ages can use this service as often as needed.

More than 94 percent of the U.S. population, including more than 40 counties in Illinois, have access to 2-1-1. This has proven to be a valuable resource for anyone looking for help, whether it’s yourself, a family member, an employee, client, or anyone who comes to you seeking assistance.

This three-year 211 pilot has been made possible by funding and support from Kane County schools, Kane County government, Batavia, Elgin, Fox Valley and Chicago Metro United Ways, a $20,000 grant from the Community Foundation of Fox River Valley and a $64,000 grant over three years from the Dunham Fund.

A North Aurora dispensary for medical marijuana has received early approval from the state of Illinois to dispense adult-use cannabis after the new law goes into effect on Jan. 1.

According to a state of Illinois news release, the North Aurora site at 61 S. Lincolnway, Suite 301, is among eight “same site” locations granted a license in the fourth round of announcements.

The Illinois Department of Financial and Professional Regulation will allow an existing medical cannabis dispensary to obtain an adult use dispensing license — so long as the dispensary complies with local zoning rules or other local laws.

So far, North Aurora is the only “Same Site” license approved in Kane County.

Starting January 1, 2020, the law permits Illinois residents who are at least 21 years old to legally possess up to 30 grams of cannabis flower, up to 5 grams of cannabis concentrate, and up to 500 milligrams of THC in a cannabis-infused product.

The Fabyan Parkway bridge construction operations will cease at the end of November for the winter, according to the Kane County Division of Transportation.

The bridge will remain in the current two-lane configuration for the next several months until work resumes in the spring.

The City of Geneva, meanwhile, announced that South Street between Southampton Drive and Burgess Road reopened to traffic Nov. 19 following the substantial completion of the bridge deck.

An Elgin man will likely live out his life in prison for shooting and killing 20-year-old Devonte Turner as he sat in a car in an apartment complex parking in 2015.

A Kane County jury on Sept. 11 found Ingram guilty of the offense of first-degree murder. In addition, the jury found that Ingram personally discharged the gun used to kill Turner.

Kane County prosecutors presented evidence that on April 30, 2015, Turner was seated in the front passenger seat of his friend’s car in a parking lot in the 1200 block of Fleetwood Drive, on Elgin’s west side. The friend was driving.

Ingram snuck up behind the car and fired seven shots from a .40-caliber handgun at Turner through the back window. Two bullets struck Turner, one in the back of the head. Turner’s friend immediately drove off and called for help. Turner died later at a hospital.

Prosecutors believe Ingram mistook Turner for someone else.

The sentence is 30 years for murder, plus a mandatory 25-year enhancement because Ingram personally fired the gun used to kill Turner. Turner presently is serving a 15-year sentence for a 2014 drug offense. He will begin to serve the murder sentence once he has completed the sentence in the drug case.

The commission is principally responsible for overseeing the development and implementation of Kane County’s comprehensive plan, presently the 2040 Plan. It is a fact-finding body, making investigations and gathering statistics necessary for fulfilling the plan and the overall wise land use planning and development of Kane County.

Commissioners work with the Kane County Planning Cooperative, a staff team represented by the Development Department, Health Department and Division of Transportation.

Regional Planning Commission meetings are conducted on a quarterly basis or as needed to provide timely guidance to the County Board.

The unidentified juvenile, reported to be 14-years-old, appeared in Juvenile Court on last week in front of Judge Anthony Coco.

An investigation into the matter conducted by Naperville Police began on Monday, November 18, when they became aware of the incident. Their investigation ultimately led to the juvenile as the person who allegedly posted the ad.

“The allegations against the juvenile in this case are beyond disturbing,” said State’s Attorney Robert Berlin. “Hate crimes have no place in our society and will not be tolerated in DuPage County. Anyone, regardless of age, accused of such disgraceful actions will be charged accordingly.”

The juvenile has been charged with two counts of Hate Crime (one Class 3 Felony and one Class 4 Felony) and one count of Disorderly Conduct (Class C Misdemeanor). His next court appearance is scheduled for Dec. 18.

“This was a despicable and extremely offensive post that is not at all reflective of the caring, welcoming community that our department serves and protects every day,” said Naperville Chief of Police Robert Marshall in a statement. “Every single person deserves the right to feel safe and welcome in our community, and this department will continue to strive to make that a reality by thoroughly investigating any allegations of hate crimes and bringing those found responsible to justice. I would like to express my appreciation to our school resource officer and supervisor who conducted a timely, thorough, detailed investigation.”