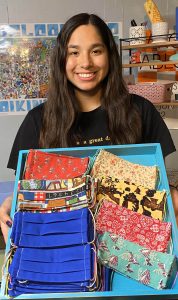 Grace Bernal’s basement has turned into a sewing factory for homemade face masks. A North Aurora resident and junior at West Aurora High School, she recently gave away 100 homemade masks from a table set up outside at her home. She only asks for a donation. Bernal is sewing 330 more masks using monetary donations and materials from WoofWoofCreations, a dog-bandana business through Etsy.

Events continued to be cancelled through May

Out of an abundance of caution and following the  Centers for Disease Control guidelines for gatherings, the City of Aurora is canceling community events through the end of May.

“We are making this critical decision in the best interest of our entire community,” said Mayor Richard C. Irvin. “With such uncertainty, we must be overly cautious as we plan gatherings for the near future. We all look forward to the time when Aurorans can come together again safely and celebrate in classic Aurora style.”

Canceled events include multiple 5K races, concerts, neighborhood festivals, carnivals and such City-organized large events as El Dia De Los Ninos, the Arbor Day Celebration, the Aurora Sports Festival and the Memorial Day Parade. Some events may be postponed until later in the year.

Aurora Downtown has already postponed the annual Food Truck Festival to October 2 and other events like Motorcycle Sunday, the Water Lantern Festival, the Mid-American Canoe and Kayak Race, the Aurora Pride Parade and shows at the Paramount Theatre have been canceled or postponed as well.

“Making the decision with such advanced notice is a benefit to event organizers and potential participants,” said Mike Nelson, the City’s Special Events Coordinator. “Everyone has been very understanding and appreciative. We are definitely all in this together.”

Man out on bond for attempted murder found with loaded weapon

A Waterman man on bond for attempted murder by diverting a natural gas line into an Elburn home now faces felony gun charges after his car got stuck in mud of a field last Thursday and a tow-truck driver alerted police.

According to the Elburn Police Department, officers responded at around 2:56 a.m. Thursday, April 9, to a report of a suspicious incident and motorist assist in the area of Paul and Hicks Streets.

A tow truck driver called police after he had been contacted to remove a vehicle that was stuck in the mud at the edge of a field north of that intersection.

Upon arrival, officers met with a man who identified himself as Frank Ryan. The officers handling this call were aware that Ryan previously had been arrested by Elburn police and was out on bond after being charged with an attempted murder at a residence in the area.

Officers then found a loaded weapon in Ryan’s vehicle, according to reports. Ryan’s FOID card had been revoked after the original charges in January. Ryan, 33, of Waterman is being held at the Kane County Jail.

The St. Charles History Museum this week announced the hiring of Lindsay Judd as its new executive director. A native of St. Charles, Judd brings more than six years of prior museum experience to her new institution.

“St. Charles has an amazing and lengthy history with all kinds of great stories and interesting figures,” Judd said. “I couldn’t be more excited to step into this new role and to help tell the stories of this city and its people,”

Stepping into the executive director position, Judd looks to build upon the museum’s newly-introduced strategic plan, and to continue working to solidify the Museum’s role as an integral resource for the community and a valuable partner in the future.

“We are very pleased with our decision to hire Lindsay,” said Museum Board President Mike Corbett. “She brings a high level of enthusiasm, passion, and dedication to our institution, and we are excited to see what she does for her community’s museum.”

In the absence of sports news during the COVID-19 emergency, here’s a little consolation: After a historic regular season, the Chicago Steel (41-7-1-0, 83 points) were named the 2019-20 Anderson Cup champions, the United States Hockey League announced last week.

This is the first time in the team’s 20-season history that the Steel have won the Anderson Cup, awarded to the regular season champion.

“We are proud to accept the Anderson Cup for the first time in team history,” said Steel President Dan Lehv.  “This title represents the hard work of our players and staff and the outstanding support we receive from our fans and billet families.  At a time where we can all use some good news, this is worth celebrating.”

The Anderson Cup was named after Harold Anderson who was influential in the formation of the Midwest Junior Hockey League, the predecessor to the USHL, and has been awarded every season since 1973.

At the time the USHL canceled its season, the Steel were the only team with a Clark Cup Playoffs berth secured. Chicago registered a franchise-record 13-game win streak twice this season, becoming the first club in league history to record multiple double-digit win streaks in a single season.

The team’s longest losing streak was just two games and only occurred once during the 49-game season.

Village postpones Wine on the Fox

The Village of Oswego has postponed its annual Wine on the Fox, the community event originally scheduled for May 2 and 3.

A new date will be announced as more guidance becomes available from the Centers for Disease Control and state and local health departments on when crowds will be able to safely gather again.

Wine-lovers who have already purchased packages for this year’s Wine on the Fox can get a refund of their packages or to use them for the rescheduled dates. For a refund, email or call Community Engagement Coordinator Julie Hoffman at 630-551-2344 or jhoffman@oswegoil.org.  Email is preferred.

Again partnering with Versiti Blood Center of Illinois, the Park District is hosting two blood  donation opportunities in May at Community Hall, located on the upper level of the Alfred Rubin Riverwalk Community Center at 305 W. Jackson Avenue in Naperville.

blood is especially important during times of crisis, and the coronavirus situation is no exception.

According to Sarah Horne from Versiti Blood Center, prospective donors should make an appointment to ensure that social distancing guidelines can be followed. Appointments may be made in one of three ways: call 800-7TO-GIVE, visit www.versiti.org/IL or via the Versiti Donor app.

Additionally, prospective donors are asked to visit www.versiti.org/home/coronavirus-information to learn about the steps that Versiti staff are taking to keep donors and staff safe and healthy during the blood donation process.

A 19-year-old has been charged with burglarizing an Aurora Township home and being in possession of a car taken from the residence.

At 9:20 a.m. April 6, Kane County deputies were dispatched to a residence on the 700 block of McClaran Avenue in Aurora Township, for a report of a man trespassing at the home.

Upon their arrival, deputies said, they located Quintana at the residence after he had been advised he was not welcome there. Deputies also located a stolen Chevrolet Silverado near the residence and allegedly found keys to the vehicle in the waistband of Quintana’s pants during a search.

During the investigation, deputies said, they learned that the Peru teen slit a window screen at the home earlier, entered the house, stole the keys to the vehicle and left with the Silverado.