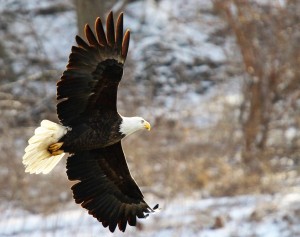 The bald eagles are back but they won’t be here much longer.

The majestic birds — national emblem of the United States since 1782 — are currently in residence in winter habitats along the Fox River and northern Illinois waterways and other favorite spots in the upper Midwest.

And they’re here in record numbers thanks to polices that offer protection plus bans on harmful chemicals that once seriously affected reproduction.

“It’s a conservation success story, there are very few of them out there like this,” said Kraig McPeek of the U.S. Fish and Wildlife Service at a recent program at Oswego’s Little White Schoolhouse museum. “The population has exploded over the last decade or so.”

The program, sponsored by the Oswegoland Heritage Association and Naperville-based The Conservation Foundation, drew nearly 90 persons.

The bald eagle population has battled back from near extinction — from a low of 791 in 1974 to more than 9,000 around the nation today.

It’s still a far cry from the estimated 500,000 that McPeek said populated North America in pre-settlement days. But bald eagles are no longer an endangered or threatened species, according to the U.S. Fish and Wildlife Service.

The birds are still safeguarded under provisions of a 1940 Bald and Golden Eagle Protection Act prohibiting persons from taking or disturbing bald eagles, their nests or eggs under penalty of up to $100,000 ($200,000 for groups) in fines and a prison term.

Fish and Wildlife personnel like McPeek, a supervisor of the federal agency’s Illinois/Iowa Field Office, are the first line of defense.

“We have a very broad responsibility and authority over fish and wildlife and we work closely with our state counterparts,” he said.

Adult bald eagles possess an eight-foot wingspan, weigh up to 15 pounds and mate for life. The white coloring on an eagle’s head takes up to five years to develop.

Eggs have been laid by eagles wintering here and with a 28-to-29 day gestation period, it means eaglets have recently or will soon appear.

“A pair will mate for life and they will try usually have multiple nests in an area,” McPeek said. “If you’ve ever seen a mature nest — one that’s been around for decades — it’s a very, very substantial structure.”

Despite legal protections dating back 70 years, bald eagles were nearly driven to extinction due to widespread use of DDT, a once popular insecticide banned in the United States in 1972.

“It wasn’t enough to kill the adults but it impacted their ability to produce egg shells that could sustain their young,” McPeek said. “They couldn’t reproduce and if you’re in a population that can’t reproduce, at some point the population starts to go down and goes down real quickly. The ban of DDT allowed the population to begin to recover.”

While the DDT threat has vanished and state and federal agencies and private groups maintain a careful watch, bald eagles still face other threats.

McPeek said tiny fragments of lead from hunters’ bullets found in deer remains and in other animals have been ingested by some eagles, leading to lead poisoning and deaths. Wildlife officials are trying to get hunters to switch to copper bullets, which don’t fragment.

“We now have a lot of bald eagles that are protected by federal laws but we still have human practices,” McPeek said. “These are unintended consequences from hunting.”

Where to look and recent bald eagle sightings

There are still opportunities to view bald eagles this winter season but time is running short.

As temperatures rise later this month bald eagles currently in residence in northern Illinois will begin treks north to territories in northern Wisconsin and Minnesota and Canada.

Open waters this winter have made it easier for eagles to hunt for fish, especially around dams.

Recent Fox River sightings have occurred at Silver Springs State Park in Yorkville, Oswego, downtown Montgomery and Geneva plus near a long-standing nest on the Mooseheart property in Batavia. Another nearby spot is along a trail in the Les Arends Forest Preserve.

Sightings in northern Kane County have occurred in Elgin, Carpentersville and Algonquin.

There are also reports of eagles spotted along the Rock River near Reckon while a newspaper photographer captured images of an eagle in downtown Rockford. Other reports came from along the Kishwaukee River in DeKalb and even in suburban areas along the Des Plaines River.

Starved Rock State Park near Ottawa offers great viewing from the veranda at the park’s lodge or from the namesake Rock, which offers a look at the wide expanse of nearby bluffs and an overview of the Illinois River below.

According to the U.S. Army Corps of Engineers, some 2,500 bald eagles congregate around locks and dams and bluffs along the upper Mississippi River in the Quad Cities region.