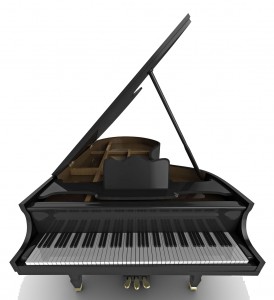 American Grands returns for the 21st year to Elgin Community College on Jan. 30.

Nearly 500 pianists of all ages and skill levels will perform during American Grands XXI on Saturday at the Elgin Community College Arts Center.

The piano event of the year will be held at 1, 4 and 7 p.m. in the ECC Arts Center’s Blizzard Theatre located in Building H on Spartan Drive Campus, 1700 Spartan Drive, Elgin.

The performances will feature a record 485 performers for American Grands. A celebration of group piano performance, American Grands feature 24 pianists (two per piano) performing on stage at once on 12 grand pianos.

Performers range in age from early elementary school to adult performers, and hail from over 50 different hometowns. The grand pianos are provided by Cordogan’s Pianoland, the event’s sponsor since its inception. Cordovan’s provides and maintains the 12 grand pianos that grace the stage at this huge annual undertaking.

The musical repertoire includes a wide range of works including classic selections by Sousa and Tchaikovsky, selections from the Broadway musical “West Side Story,” and contemporary pieces including Taylor Swift’s “Love Story” and “Shake It Off.”

Per American Grands tradition, all three performances will open with the “Star Spangled Banner” and close with “Star and Stripes Forever.”

“The increasing popularity of this event is a true testament to both our performers’ love of the piano and the value of this unique opportunity to join together with other pianists in performance,” says music director Larry Dieffenbach. “We had a little over 100 performers at the first American Grands and to watch it grow to this year’s record-breaking number of participants has truly been a joy.”

This year will mark Dieffenbach’s 20th year with American Grands and 13th as its music director. He is on the music faculty at ECC, teaches privately in Geneva, and is the organist/music director at the Little Home Church by the Wayside in Wayne.

He also is founder/director of the St. Charles International Piano Competition. Dieffenbach made his orchestral debut under the baton of New York conductor Broch Macelherin.

Jon Mortensen, who has been with American Grands since its inception, will celebrate his 21st season of Grands performances. He again serves as percussionist, percussion arranger and assistant conductor. Mortensen also serves as principal timpanist for the Rockford Symphony Orchestra and the Woodstock Mozart Festival Orchestra. He is also the director of bands at Kenyon Woods Middle School in South Elgin.