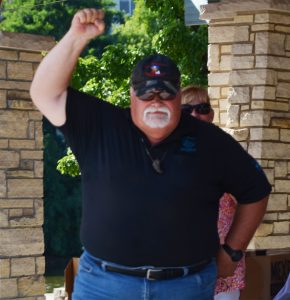 The Roosevelt-Aurora American Legion Post 84 has partnered with the Friends of LaSalle Street Historic Auto Row for the 8th Annual Auto Show on Aug. 21 on South LaSalle Street.

In building on the historical significance of this block, Dispensa worked to organize the first annual Historic Auto Show seven years ago. Again this year the FLSHAR has identified the Roosevelt-Aurora Post No. 84; one of the oldest American Legion Posts in the Nation, as a partner in not only this auto show, but future auto shows

The auto show will feature military vehicles on display, including the popular Vietnam UH-1 Helicopter (HUEY).

All proceeds of the auto show will go to the Roosevelt-Aurora Post 84 to continue supporting Aurora area veterans and their families.

“Poverty, Inc.,” a 2014 documentary about the business of global charity, will be screened at a free dinner and discussion at 6 p.m. on Aug. 17, at Wesley United Methodist Church, 14 N. May St. in Aurora.

The public is invited. Admission is free. The 94-minute film has earned 40 international film festival honors and 12 awards and screenings in 16 countries.

Director Michael Matheson Miller conducted over 200 interviews in more than 20 countries during filming. The film was made by the Acton Institute, a Michigan-based think tank which promotes free enterprise within the framework of Christian theology.The filming started in 2010.

of Primrose Farm Park
Residents will have the opportunity to learn about one of Kane County’s lesser-known agricultural and historical treasures on Aug. 18.

Primrose Farm Park in St. Charles will be open from 6:30 p.m. to 8 p.m. on for an in-depth look at the Peck family and their legacy during “The Sense of Place” program series conducted by park district naturalist Pam Otto.

The farmyard at Primrose is filled with cows mooing, roosters crowing and children learning. But how did we get here? What did our present-day living history farm actually look like in the 1930s? What led people to settle this land in the first place?

The program includes a tractor-drawn wagon ride and a sunset snack in the summer kitchen.

Advance registration is required. Registration fee is $10 per person. Learn from the Experts programs are for ages 18 and above. Call 630-444-3190 or e-mail programs@kaneforest.com to register.