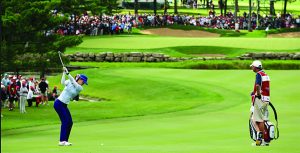 “I made my first call to the NCAA 16 years ago,” said Rich, who also designed the Sugar Grove-based private course. “I had the commissioner of the Big Ten here playing golf and he said ‘Jerry, why don’t you go after our national championship?’

“I thought, ‘sure, why not?’ and hopefully in a year or two I’d get a national championship.”

The process actually took much longer. But persistence ultimately paid off as the NCAA named Rich Harvest and his alma mater — Northern Illinois University — as 2017 hosts for the women’s and men’s golf finals.

“(The NCAA) clued me in real quick,” said Rich during a tournament preview last week at the 2,200-acre course and complex, located west of Aurora Municipal Airport and south of U.S. Route 30. “We had to make changes and we had to work with the NCAA and had to introduce the coaches from around America because they were not familiar (with the course).”

“It was quite a process. … There were a lot of sleepless nights over the last three years.”

The separate women’s and men’s finals —running over back-to-back weeks in mid-to-late May — mark the first time NIU has hosted an NCAA championship in any sport since reaching major college status in 1969. 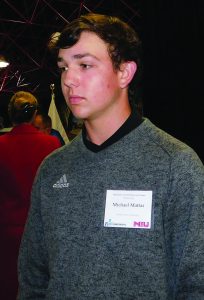 It’s also the first time for the finals in Illinois since Lake Forest’s Conway Farms Golf Club hosted in 1997.

“It’s a tremendous amount of pride, tremendously grateful to have this opportunity to host a national championship — the first-ever NCAA championship in any sport that NIU is going to be able to host,” said Brad Hoey, an NIU marketing and communications/special projects official. “We’re truly excited and looking forward to having some of the best amateur golfers in the world and some of the top collegiate teams come to Rich Harvest Farms.”

The women’s finals run May 19-24 while men arrive for competition from May 26-31. Initial rounds for each tournament run each Friday through Sunday and the field is further whittled to eight teams on Monday for finals rounds the following two days.

Although the course is located 50 miles west of Chicago’s Loop, officials have broadly cast this as a Chicago tournament. They hope to tap into a rich source of alumni from the Big Ten, Northern Illinois and competing schools.

“There isn’t another city in the country that has as many alumni,” Rich said. “We did a database of the 54 schools that attended Eugene, Ore. (site of the 2016 finals) and I just wanted to know how many alumni of these 54 universities lived in the Chicago area.”

Rich Harvest has collected significant honors since opening in the late 1990s. It was named fifth-best new private course by Golf Digest in 1999 and has landed on the magazine’s “Top 100” yearly since 2003. Rolex called it one of the world’s top 1,000 courses.

It also serves as home for the NIU men’s and women’s golf teams and hosted 2007 and 2014 NCAA Regionals, the 2003 and 2013 Mid-American Conference championships and the annual Northern Intercollegiate tournament. 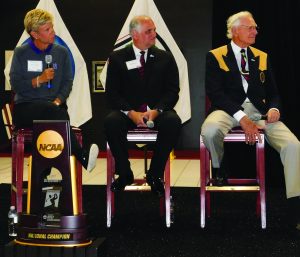 Rich said the course has hosted more than 50 amateur events since opening and is also home to the Kids Golf Foundation of Illinois.

It has also made a splash on the professional scene, including hosting the 2009 Solheim Cup, the 2012 Ryder Cup Captains Challenge and a series of USGA qualifiers.

The picturesque par-72 course, listed at 7,735 yards from the back tees, was designed by Rich himself and built in pieces as he acquired surrounding farmland.

“With its polish and landscaping, some call Rich Harvest Links the “Augusta of the Midwest,” Golfweek Magazine wrote. “But even Augusta National doesn’t have Rich Harvest’s flexibility, where every hole can play differently every day, some even from different angles and par.”

NIU golfers offered a preview of what NCAA contenders should expect.

“This course is so challenging and one of the most beautiful course I think you’ll ever witness,” said Huskies senior Sydney Brickey who has golfed as both a left-hander and right-hander. “It doesn’t really help the big hitters or make it an advantage for big hitters. You really have to be able to place your shots, make a game plan and stick to that game plan.”

“Staying patient is going to be the most important thing,” he said. “Positioning off the tees is by far the most important because you have to be able to place your ball in the correct spots. If you get in the wrong side on some of these greens you’re in big trouble.”

NCAA qualifiers will come from regional meets being played over the next two weeks. 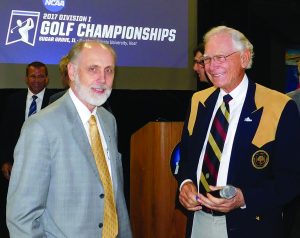 Entries will include the top 24 women’s teams and 12 individuals feeding in from four regionals being conducted May 8-10. The top 30 men’s teams will emerge from six regionals and six individuals during regional competition from May 15-17.

Arizona State tops the latest women’s rankings followed by Alabama and Stanford. Northwestern is ranked No. 11.  Among men, USC is No.1-ranked followed by Oklahoma State and Vanderbilt. Illinois is No. 8.

Oregon is the defending men’s champion while Washington is the reigning top women’s team.

NBC’s Golf Channel plans more than 100 hours of news and tournament coverage this month, including on-site telecasts during each tournament week.

For more information and tickets visit NCAA.com/Tickets. Admission is just $10 for a daily pass and students 18 and under are free with paying adult.

Rich hopes that this NCAA tourney is just the first for Rich Harvest.

“This is where it can be done and we’re going to set the bar,” he said. “We’re hoping that in the near future the NCAA will possibly come back.”