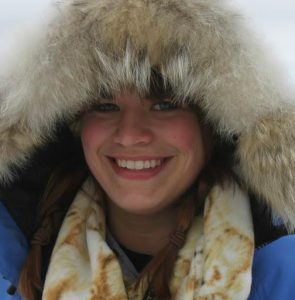 Katie Billing grew up idolizing animal adventurer and television star Steve Irwin, but she never dreamed during her undergraduate days that the hobbies and passions she was developing would lead to a fulfilling career in wildlife and conservation.

“I have always loved animals, and was always picking up worms and frogs as a kid, and running in mud,” said Billing, a Waubonsee Community College alum. “And luckily I can say that today my purpose in life is to teach people about conservation and get people to understand that animals can’t help themselves. We have to help them.”

After completing her associate in science degree at Waubonsee in 2013, the Batavia native transferred to Southern Illinois University-Carbondale to finish her undergraduate career, where she earned a B.S. in Zoology (wildlife biology and conservation). She is now working as Project Manager at Purposeful Networks in Cincinnati, Ohio.

Named WCC featured alumnus for May, Billing said deciding to attend Waubonsee was “the best decision that I ever made.”

“I tell everyone to go to community college,” she said. “It really helped shape me academically and prepared me for the next two years at SIU. It allowed me to do more with my hometown and with the environmental initiatives that were important to me.”

At Waubonsee, Billing was president of the Sustainability Club, a STEM scholar and helped to run Waubonsee’s Earth Week events. She was mentored by the college’s biology faculty, and was also involved in theater.

She said it was that well-rounded mix of support, activities and interests that helped develop the professional skills that got her to where she is today.

“As it turns out, being able to combine my love for theater, improv and teaching people about sustainability and animals was perfect for me,” she said. “I was constantly on stage and helping to build sets at Waubonsee. Those were the foundations for my path after I left.”

During her summers in college, Billing worked at Brookfield Zoo, which eventually led to a summer position at the Columbus Zoo, working with famed zookeeper Jack Hanna and his program. She also won an opportunity to work with Polar Bears International.

“My job at Brookfield Zoo was what launched me into the sustainability world,” she said, explaining a project she did there – a 25-page book about how to become a conservation leader – won her an opportunity to attend leadership camp in Canada, working with scientists and learning about climate change.

“There I was on this tundra buggy in the middle of the Arctic, surrounded by polar bears migrating through the area,” she said. After that experience, Billing remained in touch with the scientists, leading to a return trip during her time as a student at SIU.

During her senior year of college, she took on as many leadership responsibilities as she could handle. She was involved in the Zoology Club and was a student ambassador for a company that encouraged college students to share about their sustainable activities such as recycling or reusing. That company evolved into Billing’s current employer, Purposeful Networks.

In her current position, she helps clients find creative ways to use technology to drive their missions. Billing recently became a project manager of a new project called Zoo Tracks, where she is working with zoos to create next-level guest experiences through mobile programs, customization, and immersion in zoological parks.

The project encourages users to share their stories, learn more as conservation leaders, and do more sustainable behaviors post-visit for zoos and wildlife.

Billing said her engagement as an undergraduate helped her to grow a network that has nourished her career.

“I have quickly learned in the work environment, it is more about who you know versus what you know,” she said. “By being able to get involved and connected with other people, that helps you build team skills and become a leader. It widens your network.”