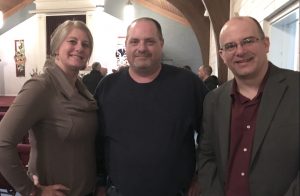 The Comcast lineman says he generally keeps to himself and tries not to rub others the wrong way.

“I’m normally not a very vocal guy,” Delong said. “This is the first time I’ve ever done anything like this.”

What Delong has done, essentially, is create a movement among his neighbors in a community-wide effort to shed light on crime.

When the Boulder Hill subdivision began to see an uptick in recent shootings, burglaries and crime, residents, especially Delong, began to take notice.

“I want Boulder Hill back,” Delong said. “Enough is enough.”

So, Delong created a Facebook page with the goal of getting neighbors united and talking. The What’s Happening In Boulder Hill page, which Delong started after a recent shooting, has nearly 600 members. It’s a place for residents to share concerns, band together and mingle in cyberspace.

“The community needed to get more active,” Delong said. “We needed to come together and communicate and do whatever necessary to stop the crime; to stop the violence.”

Not only did Delong reach out to his neighbors, he also reached out to state representatives, the county board, the sheriff’s department, the township and anyone who would listen. They all heard, and responded in a way Delong himself didn’t expect.

“It started with me putting a little heat on everyone and turned into what it is today,” he said.

Boulder Hill neighborhood watch meetings have drawn crowds of hundreds, and speakers from state and local levels have showed up to heed residents’ concerns.

A major concern on the tips of residents’ tongues is the lack of street lights illuminating the subdivision. Dark streets equate to increased crime, and concerned residents wanted to know what could be done to combat the problem.

Township Highway Commissioner Bob Rogerson said he’s working to solve the issues, and is currently in contact with ComEd to upgrade Boulder Hill’s 30 street lights to LED bulbs. He said the bulbs will produce more light than the current bulbs and be energy efficient. 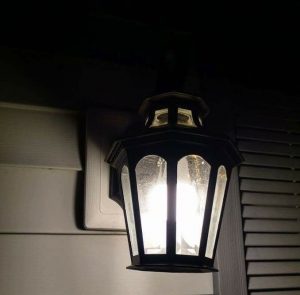 Having better lighting outside of homes and businesses will help deter crime, police have told resident in the Boulder Hill area. (Photo courtesy of Boulder Hill Neighborhood Watch)

They are also discussing adding additional street lights near schools, public pools and at the subdivision’s entrances.

In the meantime, Rogerson teamed up with Oswego Township, the Kendall County Board, Rep. Mark Batinick (R-Plainfield), the Oswego Walmart, and the Kendall County Sheriff’s Office to conjure immediate ways to light-up Boulder Hill.

What better way to do that than give away free light bulbs to be used on the front porch of each residence?

More than 1,000 LED light bulbs have been given away to residents as part of the crime-fighting initiative. The bulbs were handed out over a series of days at a command center in the Boulder Hill Market.

“I think it was a success,” Rogerson said of the lines of people who waited to receive their bulbs. “The whole idea behind this is to try and shed some light on crime in Boulder Hill and help detour it.”

The free LED bulbs use far less wattage than a traditional bulb, and can be left on all night at a low cost to homeowners.

“The bottom line is that they are cheap to leave on and will hopefully help prevent some crimes, robberies and break-ins,” Rogerson said.

Delong said he was pleased with the initiative’s outcome and is happy to see residents participating. He hopes those with stake in the community join his Facebook page.

Delong plans to keep using his voice for good and will continue to encourage community leaders to help bring change to Boulder Hill.

“We want to let the residents of Boulder Hill know that the municipalities, the state reps and leaders of our county and township are noticing. We’ve taken notice and are trying to show residents that we’ve acknowledged (their concerns) and are working on trying to help for the future.”