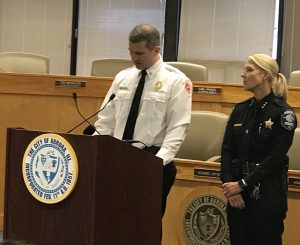 As Aurora residents band together in the wake of tragedy, the City of Lights continues to shine bright for the world to see.

“The City of Lights went dark for a period of time, but like true Aurorans, with the support of an extended community, we will continue to shine brighter and stronger together,” Mayor Richard Irvin proclaimed, during a Tuesday evening media briefing to discuss the Feb. 15 mass shooting at Henry Pratt Co. in Aurora, which left six people, including the shooter, dead, and several officers injured.

As city officials continue to meet with family members of the victims, residents and well-wishers from across the globe are joining forces to heal the wounded with thoughts, prayers and financial contributions. More than $125,000 has been raised in a matter of days to support the families whose lives were forever changed as a result of unspeakable tragedy. Fundraisers continue to be planned, donations continue to roll in, and hugs continued to be shared as the community begins to heal and lift itself up from the ashes.

“What has happened in this community since Friday is a sense of unity and solidarity that we hope will stand the test of time,” Irvin said. “We still need your prayers, well wishes and support … . We are one Aurora, Aurora strong, and stronger together.”

On hand during the 30-minute briefing were Aurora Fire Chief Gary Krienitz as well as Holly Baker with the American Red Cross, Police Chief Kristin Ziman, and her command team. 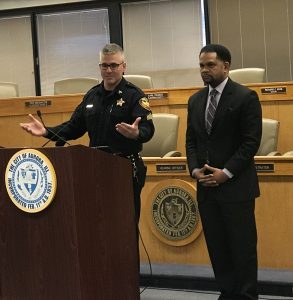 Krienitz praised his colleagues for the actions they took that day to save lives, even if it meant risking their own.

“Heroic and selfless actions were taken by both Aurora firefighters and Aurora police officers,” Krienitz said. “True courage and bravery was displayed by these men and women, and I am so proud of them.”

Ziman echoed similar sentiment as she lauded her officers and the feat they undertook that afternoon as shots fired calls filtered into 911.

“It’s something that we hear about and see, but we’re always certain that it’s not going to happen in our community … and it was happening,” Ziman said.

As officers sprang into action, they laid their lives on the line, some did so, even after having been shot.

“Within the first four minutes, our officers were shot and continued to go in,” Ziman said. “One, who had a very serious injury, said, ‘Don’t take me out! I want to go back in!’ That’s the mentality we had. That’s the resilience we had, the relentlessness we had on that scene.”

Everyone went in and did exactly as they had been trained to do. Task forces stormed the building like well-oiled machines doing a job they’d done thousands of times before, but one that many have only come upon during training.

“We play like we practice,” Ziman said of the extensive training that led to Friday’s capture of the shooter. “Everyone did exactly what they were supposed to do in that very moment.”

A stress debriefing, which took place Tuesday, confirmed what Ziman already knew. There is a lot of pain within the department. There’s a lot of “what ifs” swirling around in officers’ heads.

“I know we did everything we could, but we still carry that with us. Could we have done more?” she questioned. Despite that doubt, Ziman said she has the utmost pride for the way the Aurora Police Department performed in the face of certain danger. 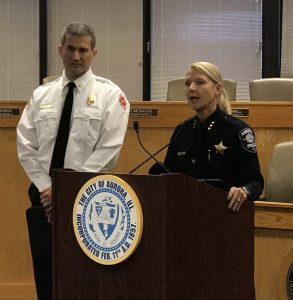 “I just want to give a message to the Aurora Police Department — the men and women — and tell you that you are all heroes. You are all warriors.”

Residents looking to give back can donate to the Aurora Strong Community Fund at http://www.gofundme.com/AuroraStrong. While Henry Pratt Co. will be paying for the victims’ funerals, donated funds will go to monetarily support the victim’s families. More than a dozen fundraisers have been planned to add to the community fund, and these events will be posted on the Aurora City website, as well the city’s social media applications.

The community support has been pivotal, Ziman said.

“When I went to the vigil (at Henry Pratt on Saturday), that’s when I felt the true strength of this community and of our Aurora citizens. I’ve never felt anything like that in my life. We are hurting, but we’re also healing together. “