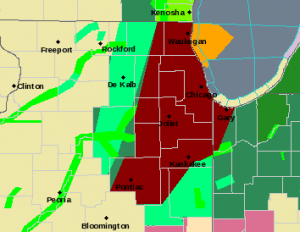 The National Weather Service has issued a Flash Flood Warning for the follow counties:

The flash flood watch lasts until 10:15 p.m. Sunday but more rain is in the forecast for Monday and Tuesday.

Naperville on Sunday evening was reporting several roads including Ogden Avenue having standing water on them. Motorists are reminded to not drive through flood waters but rather turn around and find an alternate route if you encounter a flooded road. To report water on roadways call City Dispatch 630-420-6187.

Naperville began preparing for possible flooding in the downtown district as well as residential areas near downtown and downstream of the DuPage River on Saturday.

The city is monitoring the DuPage River’s levels and is alerting residents to possible flooding conditions.

Sand and sand bags are available to residents in preparation of flooding. Residents are asked to go the to Riverview Court off of Hillside Road just east of Washington to fill and take sand bags.

Oswego police posted  on its Facebook page that barricades were going up on Washington on the west side of Illinois Route 31 in Oswego on Sunday.

The NWS forecast calls for 40-60 percent chance of rain remaining through Tuesday night.