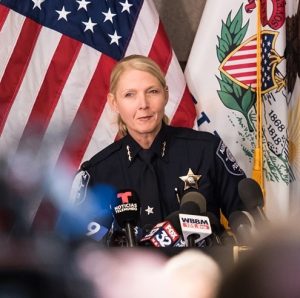 For Kristen Ziman, thoughts of the victims of last year’s Henry Pratt Company shootings are never far away.

The Aurora police chief has spoken around the country about her department’s response to the February 2019 workplace shooting that claimed five lives. She was even invited to Washington D.C. this month as a guest of Rep. Bill Foster (D-11).

“Every day I think of them,” she said at a Feb. 11 media gathering to mark one year since the Pratt deaths. “I never want to forget them. I had the honor of going to the State of the Union (as Foster’s guest) and I had their names in my pocket close to my heart.”

Ziman spoke at the downtown David Pierce Art and History Center to mark a year since the Pratt tragedy.  She recalled the frenetic minutes as initial calls of a mass shooting came in, followed by more bad news as she rushed to the scene.

An employee who was being dismissed had shot and killed the five employees — ranging from an intern on his first day of work to a plant manager and other longtime employees.

“The call came in of a mass shooting and it was one of those surreal moments where I wasn’t quite sure what I was hearing over the radio,” Ziman said. “As we were on the way to the scene, what seems like a moment that would last forever in time was listening one-by-one to my officers getting shot. I don’t quite know how to describe that experience. (But)  I knew once we got there we had a job to do.”

Department personnel — ranging from calm dispatchers to police, fire and emergency personnel  on the streets — were already stepping up to try and stop the carnage and save lives.

Ziman credited training for such unforeseen events as critical.

“That day I know lives were saved because of first responders,” she said. “This city should be very proud of its first responders as well as those who worked behind the scenes (like) those telecom operators that were the glue that held it together. It seemed chaotic, yet it was completely organized because we had prepared for that moment.”

First responders from neighboring communities and from throughout the region also rushed to Aurora to assist.

The victims included  Clayton Parks, a human resources manager from Elgin; Trevor Wehner, a Northern Illinois University student beginning an internship that day; Russell Beyer, a 20-year Pratt Co. veteran and mold operator from Yorkville; Vicente Juarez, a stock room attendant and forklift operator from Oswego; and Josh Pinkard, the plant manager who lived with his family in Oswego.

The gunman, identified as 45-year-old Gary Martin, died in a shootout with police.

Five Aurora Police officers were shot and wounded during the siege against the Pratt gunman. Ziman said one officer, Adam Miller was wounded in the eye but said “I’m shot, but I’m still in the fight.”

“That is the mindset that we have here in the City of Aurora,” Ziman said.

Two officers — Miller and Rey Rivera — are back on active duty, one has retired and two more are continuing recovery and rehabilitation with a goal of returning to work.

Experience gained during the Pratt response will help hone a more concise response should another event occur.

Ziman is an Aurora native,  member of the Aurora Police Department since 1991 and chief since 2016. She cited the need to work on communication skills with assisting departments and the importance of including paramedics trained to enter buildings alongside police to facilitate a streamlined treatment effort.

“We are going to come back from this stronger than we have ever been,” she said. “But we are always going to remember these five beautiful souls that are no longer with us and their families that have to endure life without them,” she said.