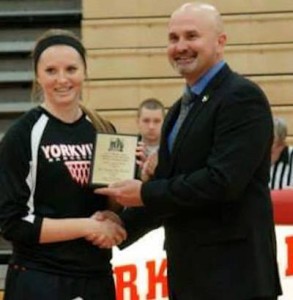 Oswego
Warner selected to play in All-American Bowl
Oswego High School senior football player Austin Warner, a 6-foot-4, 270-pound offensive tackle, was chosen to play for the West squad in the 5th Annual Semper Fidelis All-American Bowl, set for Jan. 3 at the StubHub Center, on the campus of California State University, in Carson, Calif. The game will be broadcast on Fox Sports, beginning at 8 p.m. CST. Warner, who has committed to attend Northern Illinois University, was a Southwest Prairie All-Conference selection in 2015.

Aurora
High bond rating boon for park district
As a result of strong and stable financial practices, affirmed by Standard and Poor’s, the Fox Valley Park District has maintained an AA+ bond rating that will create $34 million in savings for taxpayers. The refunding of existing bonds will lower the interest rate on approximately $29.5 million in park bonds, resulting in reduced future property tax liabilities for residents. Interest rates have dropped considerably in recent years, and combined with the excellent bond rating, the FVPD determined it to be an ideal setting in which to pursue an opportunity to refinance and lower future interest payments by 9 percent. Proceeds from the bond sale will be used for the payment of land acquisition for parks, as well as capital park and facility projects involving restoration, construction, maintenance and improvements.

Church assisting family of car crash victim
A car crash on Dec. 4 that resulted in the death of 49-year-old Aurora resident Charles D. Siebel Jr. and injuries to his 15-year-old daughter — an Oswego East High School student — has led to the arrest of a 16-year-old from Aurora, who was charged with reckless homicide and aggravated street racing. The Aurora teen allegedly was racing a 20-year-old Plainfield man when he slammed into Siebel’s vehicle on Eola Road. Siebel’s wife, Julie Siebel, is a second-grade teacher at Wheatlands Elementary School. Donations and cards for the Siebel family are being accepted at New Song Community Church, 2858 W. Hafenrichter Road, Aurora, from 9 a.m. to 5 p.m. Tuesdays and Thursdays. A GoFundMe page for the Siebel family also has been established.