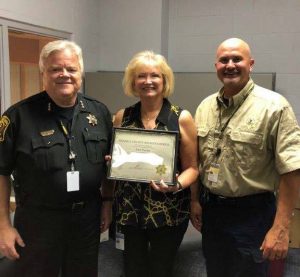 The Kendall County Sheriff’s Office employee of the second quarter as Dee Fuchs accepts her award. Sheriff Dwight Baird is on the right.

Weather permitting, Wednesday, July 18, the stretch of Downer between Broadway and State Street will change to two-way as part of multi-year conversion plan.

“As Aurora has grown, so have our patterns and plans,” said Aurora Mayor Richard C. Irvin. “Dallas, Denver, Sacramento, Louisville and Tampa are just some of the cities that have recently converted one-way streets into two-way streets.

The intersections of East Downer Place at Lincoln, Jackson and Union will all remain as all-way stop controlled intersections.

She was nominated by an employee of the Kendall County Administrative Services for her exemplary performance.

The Kendall County Sheriff’s Office employee recognition program is focused on recognizing employees for the great acts they perform. This program helps identify those employees that deserve special recognition whenever his/her duties are performed in an exemplary manner. Citizen may also be recognized under this program for an act that deserves recognition.

Fuchs started her career with the Sheriff’s Office in May of 2015. She currently is the Freedom of Information Act officer (FOIA) as well as handling day to day activities in the record division. During the last quarter Dee has completed the following projects besides her normal duties:

To nominate an employee or citizen for this award you can either submit your nomination on our KCSO web page at www.co.kendall.il.us/sheriff or stop by KCSO and complete an Award Nomination form and submit it to a supervisor. Nominations for the next quarter should be submitted by Oct. 3.

The quarterly electronics and household hazardous waste collection provided by DC Trash will take place the third Saturday of July and October. (For village of Montgomery residents only; ID required.)

TVs of all types, all electronics (basically anything with an electric plug or batteries), metal, and household hazardous waste to include materials such as oil base paint, oil, solvents, and flammable liquids will be accepted for with no charge.

It’s time for “Beer, Bands and Barns” at Dickson-Murst Farm this Saturday.

Grab a couple of lawn chairs, a blanket for a laid-back event at our historic farmstead. There’s plenty of room to relax, and one stage will be under cover in case of rain.

Admission and parking are free.

A Montgomery man will go to prison for striking a pedestrian while driving drunk in downtown Aurora late in 2016.

Richard A. Frost, 48, on Friday, July 6, 2018, agreed to a sentence of five-years’ imprisonment in the Illinois Department of Corrections in exchange for a guilty plea to aggravated DUI, Class 2 felony.

Kane County Assistant State’s Attorney Lori Anderson stated in court that shortly before 4 p.m. Dec. 3, 2016, Frost was driving in the vicinity of East Galena Boulevard and South Stolp Avenue when he struck the victim, a pedestrian who was getting into his car.

The victim got into his car, called 911 and followed Frost until he stopped his car in the 400 block of South Lake Street. When interviewed by police, Frost lied about his name.

Police found a half-empty 375 ml bottle of whisky in his coat pocket. Frost said he first opened the bottle an hour earlier and drank it as he drove around on errands, that he wasn’t drunk yet and that he didn’t know he’d struck the pedestrian.

He said he had lied about his name because his driver’s license was revoked for a prior DUI. When taken to the Aurora Police Station, Frost’s blood-alcohol concentration measured at .185. 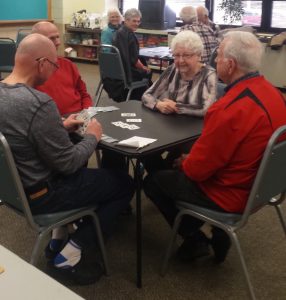 In this model, participants can gain social interaction, explore continued interest and improve their quality of life. While participants engage with peers, caregivers will have an opportunity for respite.

By delivering this model in the senior center, operators hope to have the opportunity to partner Lighthouse participants with volunteer/class participants to help achieve individual goals of socialization, creativity, or physical activity outside of the contained Lighthouse space, while maintaining safety.

This approach is not only to integrate dementia-friendly concepts but will also hopefully help create compassion and understanding among the general population.

This program will take place Monday – Thursday, 11 a.m. to 3 p.m.  Participants must be 60 years or older to take part in this private pay program.  The cost is $40 per day.

Participants need to register and go through an intake process with Executive Director Sandy Pastore, MSW,  or Lighthouse Coordinator Tanya Kutemeier, MSW.  There is a $40 application fee.

To learn if this may be an ideal program for your loved one, stop in for a tour and more information at the Oswego Senior Center, 156 E. Washington, Oswego or call 630-554-5602.

The Oswego Police Department issued 20 seat belt citations during the recent July Fourth Drive Sober or Get Pulled Over and Click It or Ticket crackdown.

Law enforcement agencies throughout Illinois participated in this statewide effort to get drunk and drugged drivers off our roadways and encourage seat belt use.

The Oswego Police Department joined forces with more than 150 other state and local law enforcement agencies conducting the crackdown campaign, which featured high-visibility enforcement combined with a variety of outreach activities including a media campaign.

The recent law enforcement effort was funded by federal traffic safety funds administered by the Illinois Department of Transportation as part of the statewide Drive Sober or Get Pulled Over and Click It or Ticket campaigns.

For more information on the Click It or Ticket mobilization, visit www.BuckleUpIllinois.org.