Matias was wanted on a $1 Million Kendall County warrant, which was secured by the Montgomery Police Department Investigations Division. Matias received the following authorized charges from the Kendall County State’s Attorney’s Office:

Matias was wanted in relation to the shooting incident which occurred on Jan. 6, at approximately 10:32 p.m., at Rosati’s Pizza Pub in the 2000 block of Orchard Road in Montgomery. In that incident, two victims were struck by gunfire, transported to the hospital, and later released with non-life-threatening injuries.

Hesed House shelter in Aurora will host its annual Champions of Hope Breakfast in February. (Photo courtesy of Hesed House)

For the past 10 years, the community has gathered together annually at this breakfast with a common goal to provide dignity and hope for those less fortunate. It takes dedication and devotion to serve as role models in making our world a better place.

Reservations for the breakfast are $40 which includes breakfast, networking, live entertainment from the award-winning Metea Valley High School’s “Off the Record” choir, and our new Champions of Hope Community Impact Award presentation.

Hesed House has also developed the Champions of Hope Community Impact Award to honor those who make significant contributions to our homeless brothers and sisters through their time, talent, or treasure. This award recognizes a passion for helping others.

Beginning this year, Hesed House will honor an individual or program that embodies Champions of Hope.

The mission of the FUSE Initiative is to develop innovative solutions for the chronically homeless individuals who frequently use public services like ambulances and emergency rooms.

Make your reservation today at HesedHope.Givesmart.com.

For more information, contact Michelle Kallevik at donate@hesedhouse.org or 630-914-6428.

On Jan. 9, at approximately 7:15 p.m., the Kendall County Sheriff’s Office responded to the 0-100 block of Basswood Court in Bristol for a report of a missing 37-year-old woman with autism. The woman, identified as Wendy M. Lippard, was seen wearing purple pajamas and black shoes. Police and fire searched the area of Galena Road and Highland Drive.

The Sheriff’s Office had deployed their drone that was flying above the area as did a Chicago Police Department helicopter.

At approximately 12:15 a.m., Lippard was found in Blackberry Creek near Willow Lane. Medical attention was given on the scene, and she was transported to Rush Copley Medical Center in Aurora, where she was later pronounced deceased.

The Kendall County Sheriff’s Office is conducting an active investigation into this incident with the assistance of the Kane County Coroner’s Office.

The Illinois Sheriffs’ Association announces that it will be awarding over $50,000 in college scholarships throughout the State of Illinois to students wishing to pursue higher education during the 2019-20 academic years.

The scholarships are to be applied to tuition, books and fees only. The student must be enrolled full-time at a certified institution of higher learning within the State of Illinois.

Sheriff Dwight A. Baird, Kendall County, will be awarding one scholarship in the amount $500.

There will be no restriction on any applicant because of race, age, creed, color, sex or national origin. The only limitations are as follows:

Students must complete the application; answer the essay question and return all documentation to the Sheriff’s Office in their permanent county of residence by March 15, 2019 (must be postmarked by this date).

On Wednesday, Jan. 16, at approximately 1:40 a.m. an off-duty Kendall County Sheriff’s patrol sergeant was driving their personal vehicle and was stopped by the Yorkville Police Department for speeding.

The excessive speed was observed as the off-duty sergeant was traveling north bound on Route 47 between Route 71 and Route 126. The sergeant was charged with a class A misdemeanor speeding violation and released from the scene on a personal recognizance bond.

The Kendall County Sheriff’s Office says as soon as it became aware of the situation, appropriate steps were taken to address the alleged violation and initiate an inquiry into the incident.

The Kendall County Sheriff’s Office is committed to the citizens we serve and hold our employees to the highest of standards.

The patrol sergeant has been placed on administrative assignment pending the results of an internal investigation. 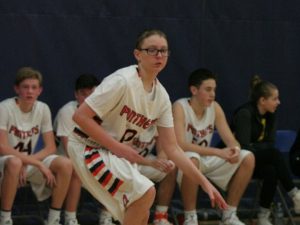 Oswego High School senior Connor Robinson. The cancer survivor and his family invite the public to the Panthers & Foxes blood drive on Saturday, Jan. 26 during the annual Communities vs. Cancer event at OHS.

The Panthers & Foxes “Out for Blood” blood drive will take place on Saturday, Jan. 26 from 12-4 p.m. during the annual Communities vs. Cancer event at Oswego High School. Donors should enter through the athletics entrance, Door 35.

All donors will receive free admission to the event’s basketball games, as well as five raffle tickets and a T-shirt.

When he was nine years old, Connor Robinson was diagnosed with leukemia in 2010 at the age of 9. He underwent 39 months of intensive chemotherapy with very few complications and no hospitalizations, finishing his treatment in June 2013.

This was just a few months after the death of his 19-year-old sister who had passed away from the same illness.

During his treatment, Connor, like most cancer patients, received numerous blood transfusions. In fact, during his relapse in October 2014, it was blood products that helped keep Connor alive. In 2015, Connor underwent a stem cell transplant and received many units of blood as a part of the transplant process.

Today, Connor is a senior at Oswego High School and is fortunate to be alive and in good health. It is the blood donations of friends and strangers that have been an important component of his treatment and recovery over the past eight years.

Connor and his family are grateful for everyone who takes the time to give the gift of life. The Robinson family invites the Oswego and Yorkville communities to join them at the Oswego High School Field House on Saturday, Jan. 26, from noon until 4 p.m. to donate blood as part of the annual Communities vs. Cancer event.

In addition to the blood drive, there will be a bake sale, raffles and other fun activities going on throughout the day as the Oswego and Yorkville communities come together once again this year.

Donate blood and you will receive five raffle tickets and free admission to the games.

The Oswego Community Unit School District 308 Board of Education will host a public forum on Monday, Jan. 28, at 6:30 p.m. in the Performing Arts Center at Oswego East High School, 1525 Harvey Road, Oswego.

The event will be the second of two planned public forums that gives parents and community members an opportunity to share input, comments, issues and concerns with the district and discuss the successes and challenges. The evening will include a presentation of the district’s current and future financial state, as well as potential budget cuts for the 2019-2020 school year.