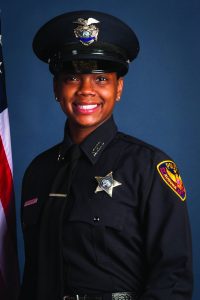 Calice is a Community Oriented Policing Officer with the Aurora Police Department.

Her interactions with students, educators and community members inspired her to establish the Girls Run the World mentoring program.

Helping to guide young ladies at East Aurora, Metea Valley and West Aurora High Schools, the mentoring program develops leadership among the young women at each high school and gives them a safe place to discuss any issues they’re dealing with at home or at school.

Mayor Irvin will also present the 2019 Mayor’s AAHAB Lifetime Achievement Award to Larry Shepard for his decades of work as an educator in West Aurora Schools and as a community advocate.

During the ceremony, Aurora high school students will receive the Henry Cowherd Scholarship named in honor of longtime community leader and 2008 African-American Leader of the Year, the late Mr. Henry Cowherd.

Tickets are $60, with a portion going to the Henry Cowherd Scholarship Fund. Individual tickets can be purchased at www.aurora-il.org/aahab. Tables of 10, special discounted student tickets and tickets by check can be reserved by contacting Dee Hakala at dhakala@aurora-il.org or 630-256-3408.

Aurora Police continue to look for witnesses and information surrounding a Near East Side shooting that occurred Jan. 22 in which a 24-year-old Aurora man was critically injured.

Police responded to the shooting scene in the 400 block of South State Street at around 8:05 p.m. and located the victim sitting in his vehicle parked in his driveway and suffering from multiple gunshot wounds.

Police said it appears that whoever shot the man approached the vehicle on foot and then opened fire. There is no suspect description.

Aurora Fire Department Paramedics rushed the victim to an Aurora Hospital where he underwent surgery and continues to be treated.

A definite motive has not yet been established but the crime is not believed to be random.

Tips to Crime Stoppers are anonymous, and those who call in can qualify for a cash reward of up to $5000 if it leads to an arrest.

Kifowit to chair Veterans Affairs and other committees

State Rep. Stephanie Kifowit, D-Oswego, will bring experience from her service in the U.S. Marine Corps and focus on public integrity to two key Illinois House committees this year, as she has been selected to chair the Veterans Affairs and State Government Administration Committees.

“I am excited about the work ahead of us, and the opportunity to use my chairmanships to advocate for better care for veterans and increased government accountability and transparency,” said Kifowit. “As a veteran, I am passionate about addressing barriers to Veteran employment, services and housing, in addition to ending veteran suicide. These are not easy goals to accomplish, but I am optimistic about the progress we can make in the coming months.”

Kifowit has previously introduced and supported legislation to assist Veterans and help restore accountability to state government. In response to mismanagement of the Quincy Veterans Home that led to the deaths of 13 residents, Kifowit passed House Bill 4278, which requires public reporting of infectious disease outbreaks at Illinois’ veterans’ homes.

Kifowit also passed Senate Bill 3604 to prevent government entities from awarding severance pay to employees who were dismissed for misconduct, as well as limit the amount of severance pay to the equivalent of 20 weeks’ compensation.

The legislation was introduced in response to at least two incidents at Illinois colleges and universities in which upper-six-figure severance packages were granted to former presidents dismissed for improper behavior.

“Disgraced administrators should not be taking hundreds of thousands of taxpayer dollars after being terminated from their duties,” said Kifowit. “Eliminating these types of payouts is one example of my efforts to bring more accountability and transparency to how we are running our state agencies, and I am committed to weeding out additional instances of corruption.”

The Kendall County Sheriff’s Office has been awarded a safety grant from the Insurance Program Managers Group (IPMG). IPMG is the insurance provider for Kendall County. The grant award is for $10,000, which will cover a portion of the cost towards purchasing Taser X-2 stun guns for the Patrol and Corrections Division.

The Tasers will also be outfitted with a camera that records both video and audio footage at the time of deployment.

The deployment of these Tasers will provide deputies a level of protection when responding to dangerous calls that require a rapid response from law enforcement for confrontational subjects. It is used as a less lethal force option during potentially violent encounters to subdue a suspect and minimize the potential of injury to the suspect, other members of the public, and responding deputies.

Sheriff Dwight A. Baird said, “The TASER system will allow our deputies another option to deploy when faced with incidents that could possibly result in serious injury to deputies and citizens.

“The leadership of the Kendall County Sheriff’s Office is confident that the TASER devices will reduce possibility of these injuries. Our commitment to the safety of our citizens and our deputies remains the utmost priority every day.” 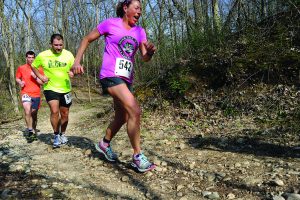 Start your spring run season with a unique trail run through the wilderness at Saw Wee Kee Spring Trail Run from 4-8 p.m. on April 13 in Oswego. (Chronicle Media photo)

Participate in the first of the Oswego Triple Race Series. Start your spring run season with a unique trail run through the wilderness at Saw Wee Kee Spring Trail Run from 4-8 p.m. on April 13, a single-track run through the blooming forest. The soft path, with its twists and turns, ups and downs, makes for a great natural run.

The run is a bib-timed event with a one hour start window. Runners and walkers can begin anytime between 4-5 p.m.

The trail run is not open for strollers and dogs. Children 12 and under must be accompanied by an adult for the entirety of the approximately 3-mile race. Race fee includes Trail Run apparel, post-race brats and refreshments.

If runners wear headphones, give one ear for the course.  Tickets are $45. Pre-registration ends March 31. Early Bird Discount ($20 tickets) expires Jan. 31. Trail Run day of registration begins at 3:30 p.m. and is $60. There are no refunds for athletic events.

Next on the On Point Speaker Series: Get Organized

Does your child struggle with planning, organizing, and completing tasks such as homework? Join clinical psychologist Dr. Kunal Sachdev from 6-8 p.m. on Thursday, Jan. 31 to learn how parents can help their children be more organized and successful in school.

The event will take place in the auditorium of Yorkville Middle School, 920 Prairie Crossing Drive, Yorkville.

Time for questions will be provided.

Sachdev is a licensed clinical psychologist, having earned his doctorate from Midwestern University in Downers Grove. He has worked in a variety of settings such as hospitals, higher education, integrated care centers, and outpatient clinics.

He also serves as a faculty member in the Psy.D. program at Midwestern University and at the Department of Behavioral Sciences at Rush University Medical Center.

Timeout 4 Kids and Yorkville Cheer are collecting stuffed animals to ship to children in California who were affected by the recent wildfires.