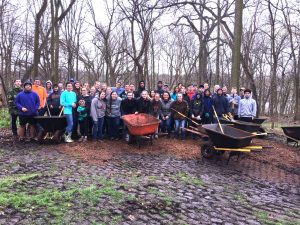 Approximately 50 students from the Yorkville Christian High School volunteered last week and spread over 100 yards of mulch on the Clark Park Trail with the assistance of Parks Department staff. (Photo courtesy of Yorkville Parks and Recreation)

The Fox River from St. Charles to Millington has been placed under a flood warning. This warning is expected to last until May 8.

Due to heavy rains already received, along with more rain in the forecast, there is a predicted rise in water levels that will put the river into minor flood stage. This will cause low-level flooding of parks and yards, but there is typically no direct impact to physical structures (like homes and businesses) at this level.

While the river level is minor, but the Kendall County Emergency Management Agency warns residents to keep an eye out for flash flooding and water on roadways. This can happen with little warning and can prove to be more hazardous than river flooding.

David R. Acevedo, 27, of Plano was sentenced this past week to 45 years in prison for the first degree murder of Andrew (A.J.) Erickson back on Sept. 11, 2015, according to Kendall County State’s Attorney Eric Weis.

Judge Robert Pilmer, who presided over the two-day bench trial in November, listened to over two hours of witness and evidence of other crimes committed by Acevedo including selling illegal firearms and hundreds of rounds of ammunition to a confidential informant just weeks before the murder.

During the sentencing hearing, three victim impact statements were provided to Judge Pilmer about the emotional and lasting impact A.J. Erickson murder has had on each family member. Additionally, Acevedo’s prior criminal record was published to the court. Acevedo did not present any witnesses or evidence in mitigation.

The Kendall County Sheriff’s Office is deploying an Intercept Tek 84 body scanner that will detect contraband prior to coming into and circulating in the jail.

The scanner will ensure that deputies can safely and easily find weapons and other contraband that may be concealed on one’s person. The scanner utilizes state of the art technology that will not only improve the safety of the officers and inmates, but it will also save money by making the search process more efficient.

The new body scanner will allow a less intrusive search that is more thorough and safer for the inmates and staff.

Prisons and jails are rapidly adopting body scanners to detect weapons and contraband hidden in body cavities and elsewhere on inmates and visitors. Unlike airport body scanners, these scanners use a low-level of x-rays transmitted through the body. Intercept provides a high-resolution scan of the full body in a single image. 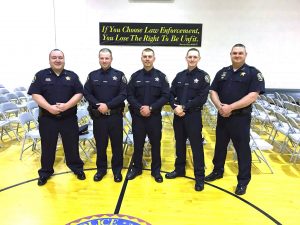 Kendall County Deputies and Sheriff’s Office employees will be on top of Dunkin’ Donuts located at 3300 Orchard Road, Oswego from 5 a.m. to noon on May 17 in support of Special Olympics Illinois.

Everyone who visits us and donates to the Torch Run will receive a fee donut. Individuals who donate at least $10 will receive a Law Enforcement Torch Run Travel mug (while supplies last) and a coupon for a free medium drink. Torch Run T-shirts and hats will also be for sale onsite.

Scott’s Law (625 ILCS 5/11-907) requires motorists to slow down and move over if possible on approach to flashing emergency lights on the side of the road. A Scott’s Law violation can carry a possible fine of up to $10,000 and could result in a driver’s license suspension.

On April 29, at approximately 11:03 p.m. the Kendall County Sheriff’s Office responded to a report of shots fired and an injured subject in the 200 block of Fernwood Road in unincorporated Oswego Township.

Upon arrival, deputies located a person with a gunshot wound in a home. The person received immediate medical treatment from responding deputies and care was turned over to medical personnel who arrived after law enforcement, according to the Sheriff’s Office.

The person was transported to Rush Copley Hospital in stable condition to receive further medical care. It appears this is an isolated incident and the investigation is ongoing.

Area residents and businesses are encouraged to contact the Kendall County Sheriff’s Office if they have any information that may assist with the investigation of this incident in any way.

Anyone with information pertaining to this incident or any other criminal activity and you wish to remain anonymous you may do so by calling the Kendall County Crimestoppers tip line at 630-553-5999.

Walker has been a favorite entertainer at past events in Montgomery and will perform the hits and explore the history of musical legends such as Elvis Presley, Johnny Cash and Jerry Lee Lewis. The event is free and open to the public.

Walker is one of the Chicago area’s most versatile guitarists and vocalists and has been performing for audiences for over 40 years. He has been playing guitar and singing since age 11 and grew up in a musical household.

Both his parents sang in Barbershop choruses and he quickly developed an astute ear for music and harmonies. He particularly enjoys sharing his talents with senior groups and is a popular performer throughout the suburbs.

The U.S. News and World Report 2019 list of Best High Schools has been released and both Oswego Community Unit School District 308 high schools are included.

The U.S. News and World Report ratings are based on a number of factors including college readiness, math and reading proficiency, math and reading performance, scores of student performance in underserved populations, college curriculum breadth, and graduation rate. According to the publication, “The highest ranked U.S. public schools in U.S. News & World Report’s 2019 Best High Schools rankings are those whose attendees demonstrated outstanding outcomes above expectations in math and reading state assessments, passed a diverse array of college-level exams and graduated in high proportions. Under U.S. News’ revamped 2019 rankings methodology, nearly every public high school was ranked.” Rankings include charter and magnet schools.

Dr. Jamie Max, School District 308 director of high school education, states “We are pleased to once again be recognized as two of the top high schools from the US News and World Report. This ranking is a reflection of the dedication and determination of our students and staff as we prepare our high school graduates for successful futures.”  The full rankings can be viewed online at www.usnews.com/education/best-high-schools

Residents, contractors, business owners, etc. can apply online for permits, submit documents, schedule inspections and track the status of their request through the review process from their smart phone or computer here: http://www.yorkville.il.us/627/Building-Permit-and-Inspection-Request.

Users can create an account allowing them the ability to apply online for nearly fifty (50) types of residential or commercial permits ranging from pool installation, decks, patios and roofs to new construction, additions, change of occupancy and signs.

Applicants can also request and schedule building inspections for open permits through the web-portal and receive an email of the results.