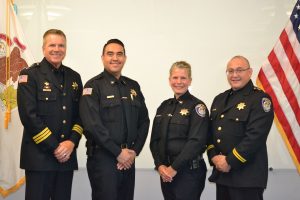 At a ceremony on June 20, the Montgomery Police Department promoted two sergeants to the rank of commander. (Photo courtesy of village of Montgomery)

An Aurora mother now faces murder charges after her 6-month-old son died from injuries that occurred when she allegedly battered him late last week.

Kane County State’s Attorney Joe McMahon has charged 23-year-old Trivea S. Jones with the offense of first-degree murder, 2 counts.
Kane County prosecutors allege that the afternoon of June 21, Jones battered her 6-month-old son, causing his death four days later.
According to Aurora police, first responders were called at about 5 p.m. that afternoon, to Jones’ home in the 2000 block of Fox Pointe Drive regarding an unconscious infant. They arrived to find the child not breathing.

They took him to a nearby hospital, where doctors noted severe trauma, including a fractured skull. The child was on life support until doctors pronounced him dead on June 25.
Kane County prosecutors initially charged Jones with the offenses of aggravated battery to a child, Class X felony, and aggravated domestic battery, Class 2 felony. After the child died, prosecutors authorized the murder charges and dismissed the initial case, No. 19CF1239.
Jones appeared in Kane County bond court. Kane County Associate Judge Keith Johnson set Jones’ bail at $2 million with 10 percent ($200,000) to apply for bond.

If convicted, Jones faces a sentence of between 20 and 60 years’ imprisonment.

At 10 a.m. on Tuesday, July 9, battlefield expert Robert Mueller will present “Pearl Harbor: A Day of Infamy” at the Montgomery Village Hall, 200 N. River St. The event is free and open to the general public.
On Dec. 7, 1941, Japanese warplanes appeared over the Hawaiian Islands to launch a surprise aerial bombardment of American air and naval installations. It was the event that propelled the United States into the Second World War.

Mueller will review why and how the Japanese almost wiped out the American Pacific Fleet in one morning.

Using individual stories of the men who responded to the attack, Mueller presents the tactics and the consequences of the attack. The program ends with a review of the surviving relics and, appropriately, a visit to National Memorial Cemetery of the Pacific.

If you can sing, dance, play a musical instrument, do ventriloquism or magic, or have any other unique talent, the Montgomery’s Talent Showcase is back and people of all ages are invited to try out for the show.
Auditions are being held Saturday, July 13 at 10 a.m. in the Community Room on the upper level of the Montgomery Village Hall, 200 N. River St. A panel will select family-friendly performers to be featured at Montgomery’s Talent Showcase on Saturday, Aug. 10, at noon on the Montgomery Fest Main Stage.

Performers do not need to be Montgomery residents in order to try out, and talents of all types are welcome.
More information on Montgomery Fest and registration forms are available on the Village’s website or call Renee Mason at 630-896-8080, ext. 9034 with questions.

At a ceremony on June 20 at the Montgomery Police Department, Chief Phil Smith promoted two sergeants to the rank of commander. With the promotion, Sgt. Ismael Diaz and Sgt. Liz Palko are the first to hold the rank of commander for the village.
During the ceremony, the police chief stated, “Promotions are part of the Montgomery Police Department Succession Plan to ensure we identify and develop futures executive leaders with the potential to fill key leadership roles within our agency.” Smith continued “Promoting from within our own agency, helps retain institutional knowledge.”
Commanders Diaz and Palko were surrounded by friends, family and coworkers during the ceremony. Diaz will assume command of patrol operations and Commander Palko will command the Support Services Division.

On Sept. 2, Kendall County Sheriff’s Deputies responded to the 100 Block of Harbor Drive, unincorporated Oswego Township, for a report of a male victim who had been battered by multiple individuals.
Sheriff’s detectives began an investigation, and on May 22, the Kendall County State’s Attorney’s Office charged two individuals.
Lamerrica Lacking, a 35-year-old female from the 1000 Block of Pebble Beach Drive, Hanover Park; and Ebony Kennedy, a 27-year-old female from the 2000 Block of Jericho Road, Aurora were both charged with 3 counts of Home Invasion, class X felonies, Aggravated Battery, a class 3 felony, and Criminal Trespass to Residence, a class 4 felony.
Bond was set at $100,000, with 10 percent to apply.
Both individuals were taken into custody with the assistance of the U.S. Marshals Great Lakes Fugitive Task Force. 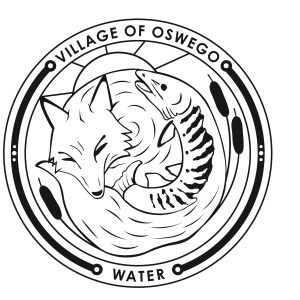 The village of Oswego and the Oswego Cultural Arts Commission have announced the winner of their manhole cover public art contest with a piece designed to connect downtown Oswego to its surrounding natural beauty.
‘Fox and Muskie’ by Boulder Hill resident Elizabeth Teitge, depicts a fox and a muskie nestled into each other, capturing the perpetual movement of a native fish and the serenity of a snoozing fox. The figures are surrounded by cattails and a rising sun.
“The Fox River is a key landmark for Oswego. That’s part of what defines Oswego is being on the river,” Teitge said. “Muskies are indigenous to the Fox (River), and foxes tend to sleep curling up in a ball, so I played around with how I could make that flow.”
As construction rolls out on new dining, shopping and residential developments and their adjacent street and infrastructure upgrades, manholes for water, sewer and electrical infrastructure will feature the new design on their covers.

Downtown visitors will be able to view the manhole covers up close particularly on the new Block 11, where a pedestrian-friendly alleyway promenade is planned to connect new restaurants.
The design was one of 42 designed submitted to a call for artists made in December. A group of Oswego residents, downtown business owners and staff from various village departments weighted in on the submitted designs and identified three finalists.

Local artists Judy Kellerman, Liz Tadych, and Teitge were awarded $200 for their designs. Teitge has been awarded an additional $1,000 for submitting the winning design and working with the Village and the manhole cover fabricator to produce a version of the design that can be cast in iron.
This project was chosen as a first step towards public art because it allows the village to add to the public art collection for only the cost of casting a mold and awarding the winning artists.

Due to budget cutting measures, junior high athletics were set to move to intramural-only beginning in August, however due to the union agreement, the schools will see competitive sports return, at least for one year.
The OEA membership voted to accept the MOU with changes to schedules A and B of the current collective bargaining agreement, effective only for the 2019-2020 school year.

The change brings about enough savings to allow for competitive sports to be held at the junior high level. The agreement is for one year only.

The maximum season for competitive junior high sports, under the new agreement, will be a maximum of seven weeks in duration.

Competitive sports for junior high include cross country, soccer, track, volleyball, basketball, and wrestling. Additionally, all athletic-related expenses in Schedule B (including ticket takers, vehicle parkers, etc.) for junior and senior high schools will be reduced by 10 percent to capture additional savings