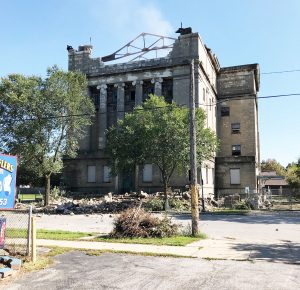 Portions of metal roof support beams are visible at the top of the former Masonic Temple that was damaged in a fire that started on Oct. 7 and went through much of Oct. 8 before it was finally brought under control. (Photo by Jack McCarthy / Chronicle Media)

Second chance for Masonic Temple goes up in flames

Plans to redevelop the historic Lincoln Masonic Temple in downtown Aurora were destroyed when an extra-alarm blaze that began late on Monday, Oct. 7 burned for hours and wreaked havoc on the building.

By the time Aurora firefighters left the near East Side site on the afternoon of Oct. 8, the building was in ruins and the only remedy was to demolish the remains.

“After nearly 100 years, the Masonic Temple has seen its final day,” said Aurora Mayor Richard Irvin during a City Hall press conference. “We’re an old city — 180 years old — and we have a number of structures that are that age or older. To lose one in that manor affects us greatly.”

In response to a question, Irvin said while there were no active plans to revive the Masonic Temple property, listed in 1982 on the National Register of Historic Places. But it was “in the conversation” for eventual redevelopment.

Four exterior walls remained standing on as light smoke continued to rise and drift late on Oct. 8 around the structure located on the southeast corner of Benton Street and Lincoln Avenue. Work crews erected fencing on Lincoln and Benton to keep the property secure and a worker wearing a jacket identifying a demolition company, walked along the edges of the location.

No one was killed or injured while one family living adjacent to the Masonic Temple temporarily left their home.

Sheriff’s Office partners with WCC on classes for inmates

The Kendall County Sheriff’s Office has partnered with Waubonsee Community College to provide Financial Literacy and Soft Skills training classes to a diverse population of male and female offenders.

Our professional staff is working hard to help inmates and detainees build academic and life skills that better prepare them to become productive members of society as they reenter the community.

The Financial Literacy training class will provide the inmates with skills and strategies to support positive personal financial management. Inmates will learn strategies for getting out of and/or avoiding debt, balancing a checking account, building savings, and creating a personal budget.

The soft skills training class will provide inmates with the knowledge of soft, or interpersonal, skills required for success in today’s work environment. Inmates will develop strategies for utilizing soft skills in applying for a job and working well in an employment setting.

“I am proud to have a partnership with the community to educate our inmates and reduce recidivism. After first addressing the issue of substance abuse with our inmates, nothing is more important than providing educational and vocational training to prepare them for employment and a productive life upon their release,” said Sheriff Dwight Baird.

Continuing her efforts to be accessible to the residents she serves, State Rep. Stephanie Kifowit, D-Oswego, is announcing her schedule of Coffee with Kifowit events throughout the month of October.

“As an elected official, it is my responsibility to be proactive and accessible to the residents of my district and listen to their needs as a community,” said Kifowit. “Frequently meeting residents in the district helps me better represent their interests while in Springfield.”

“This year’s General Assembly has taken up a number of influential topics, such as healthcare, property taxes and infrastructure,” said Kifowit. “A lot of work remains to be done in Springfield, and I look forward to bringing the shared priorities of local residents to the state capital.” 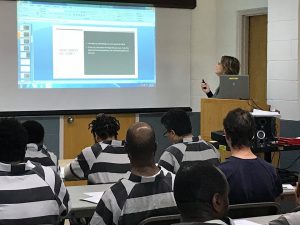 Senior Services Associates, 908 Game Farm Road, Yorkville, will be going on a daytrip on Thursday, Oct. 24 at 3:28 p.m. to head to the Prairie Grass Restaurant in Northbrook for dinner.

The cost of the event will be $45 and includes transportation and entry into the garden.  Dinner costs will be responsibility of each person.

The Village of Montgomery is partnering with Paramount School of the Arts in Aurora to offer free Kindermusik demo classes on Monday, Nov. 4.

According to Corinne Vargas, village of Montgomery Community Relations Manager, “This new partnership with Paramount School of the Arts is very exciting. We are happy to promote, not only the school, but the importance of early childhood creative and social development.”

Vargas elaborated on the new partnership “I was seeking out new partnerships that would bring more creative outlets to the Montgomery residents, whether it be through visual, theatrical or educational art. Partnering with the Paramount School of the Arts and providing these free Kindermusik classes is a natural fit for the community.”

Parents and children will experience singing, dancing, playing instruments and hearing stories; using the power and joy of music-making to help children learn and grow socially, musically and cognitively. The free classes will be limited to approximately 15 children per age group.

To RSVP for one of the free classes visit ci.montgomery.il.us and fill out the online form. Contact Julie at kindermusik@paramountarts.com for more details about the kindermusik program or about Paramount School of the Arts.

“The individuals honored and recognized tonight not only go above and beyond for our students and schools but they also reflect the true meaning of service,” said Dr. John Sparlin, superintendent of schools. “The board and I are honored to recognize our teachers and our employees through our PRIDE program for all they do on a daily basis for the success of our students.”

This year, the PRIDE program will recognize more teachers and employees from all schools and departments for their great work! The winners for the month of October 2019 are:

Teachers of the Month:

Employees of the Month:

Due to the poor weather conditions on Saturday, October 5 the city Egg Hunt and Costume Parade have been rescheduled for Friday, October 18. Both events take place in Town Square Park, 301 N. Bridge St., and begin around 6:40 p.m.

Come out wearing your spookiest, most creative costume and join us in the Halloween Costume Parade.  Children will have their chance at winning prices as they parade through the park.

Join the Yorkville Parks and Recreation Department for this spooktacular event. The annual Halloween Egg Hunt, which begins at 7 p.m., is a twist on an old tradition as children wear a costume, bring a flashlight and container for eggs, and hunt in the darkness for candy-filled eggs.  This is a free event intended for children 10 a