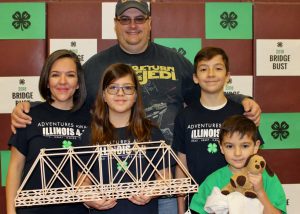 The Bridge Bust challenge is facilitated by the University of Illinois Extension and 4-H Youth Development of DuPage, Kane and Kendall counties. (Photo courtesy of 4-H)

Build memories (and a Bridge) with your family

The eighth annual the 2020 Bridge Bust Contest with 4-H. event puts your creativity, design, engineering and team skills to the test.

Competition participants may enter in one of three categories: youth teams (ages 10 and older), family teams including adults and youth, and school teams for grades 5 to 12. Teams must have a minimum of two members. Registered teams will pick up all project supplies and the official contest packet, which includes general event information, rules and regulations, in early December.

The contest also offers a demonstration entry choice, which is intended to give younger participants the opportunity to practice engineering and design skills without competition. These groups will have the option to conference with judges and/or break their bridge as a demonstration only. Teams may include one to two adults and any number of youth between ages 5 and 9 only. Space is very limited for this option, which is in its third year.

This fun, educational challenge is facilitated by the University of Illinois Extension and 4-H Youth Development of DuPage, Kane and Kendall counties.

To learn more or register your team, visit go.illinois.edu/bridgebust4Hdkk. Space is limited. Registration closes Monday, Dec. 2, or when the program meets capacity. The cost is $40 per team. If you need reasonable accommodation to participate in this program, notify at registration or contact the Extension Office at 630-553-5823. Early requests are strongly encouraged to allow sufficient time for meeting your access needs.

Mading, 21, 0-50 block of Cannonball Trail in Bristol, was wanted on a total of five charges by two different county jurisdictions in the area.

The Kendall County Sheriff’s Office encourages anyone with tips or information regarding crime to contact detectives@co.kendall.il.us or 630-553-5856. Callers who wish to remain anonymous can contact the Kendall County Crime stoppers at 630-553-5999.

As Illinoisans gear up for one of the busiest travel times of the year, the Kendall County Sheriff’s Office announces its plans for a traffic safety campaign focusing on impaired and unbuckled drivers.
The Sheriff’s Office is partnering with the Illinois State Police and local law enforcement across Illinois for the increased statewide effort. The high-visibility crackdown will run now through the holiday weekend into the early morning hours of Monday, Dec. 2.
The “Click It or Ticket” and “Drive Sober or Get Pulled Over” campaigns are funded by federal traffic safety funds administered by IDOT. The crackdown runs concurrently with a media campaign reminding motorists that impaired driving has “Life or Death” consequences. Visit LifeOrDeathIllinois.com for more information.

Open house on Metra Extension for Kendall scheduled
Members of the public are invited to attend an open house on Tuesday, Dec. 3, regarding the potential extension of commuter rail service into Kendall County.
The open house will be held from 4:30 to 7:30 p.m. on Tuesday, Dec. 3, at Oswego Village Hall, 100 Parkers Mill, Oswego.
There has been interest in extending commuter rail service into Kendall County for many years to serve the growing population and travel demand in the area. In coordination with Metra, the Kendall Extension Study has been initiated to study the feasibility of extending the BNSF commuter rail line beyond its existing terminus in Aurora.

This study is funded through previously secured federal earmarked funds that are only eligible for use on this effort. It will examine new outlying yard location in addition to new commuter rail stations in Montgomery, Oswego, Yorkville, Plano, and Sandwich.

Extending the commuter rail service to Kendall County, which is beyond the six-county Regional Transportation Authority (RTA) service area, would require approval from BNSF, RTA and Metra. It may also require potential changes in state law.
This open house meeting will provide an opportunity for the public to learn about the overall project, including the study elements and station location options. The format will allow the public to learn about the study, view exhibits and provide comments. While there is no formal presentation, project staff will be available to answer questions.

Village Hall to serve as center for Toys for Tots

Give the gift of play this holiday season by donating an unwrapped toy for the Marine Toys for Tots Program. Drop-off boxes are now available at the Montgomery Village Hall, 200 N. River St. and the Police Department, 10 Civic Center Drive.

Anyone wishing to contribute new, unwrapped gifts (toys, games, sports equipment, children’s books, etc.) may drop them off by December 12 from 8 a.m. to 4:30 p.m..
According to the Toys for Tots website “The objectives of the Foundation are to help less fortunate children throughout the United States experience the joy of Christmas; to play an active role in the development of one of our nation’s most valuable resources – our children; to unite all members of local communities in a common cause for three months each year during the annual toy collection and distribution campaign; and to contribute to improving communities in the future.”
To learn more about Toys for Tots visit toysfortots.org. 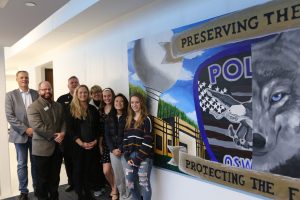 The Oswego Police joined with Oswego high school students on Nov. 20 in unveiling the new murals that adorn the walls of the new police department. Students from both OHS and OEHS participated in the project. (Photos courtesy of Oswego Police Dept.)

Oswego Police Department (OPD) Chief Jeff Burgner had a vision for the blank walls when the police station was being built.  He knew he wanted to collaborate with both high schools’ art departments to create pieces that would reflect a partnership between not only the Police Department and the community.

The product of his vision was unveiled earlier this week as student artists, school and district representatives, OPD officers, and Village of Oswego leaders revealed two beautiful murals.
This process all started as an idea over a year ago.

Staff from OPD met with students and staff at Oswego High School and Oswego East High School to share insights on how they serve the community and what that means to them.  The students took that information to design and create the beautiful murals.
Oswego High School’s mural focuses on “unity”.  In the mural, you will see both buildings represented on each side as well as the “O” for Oswego and the police badge.  The focus of the mural are the two hands coming together in the center in “unity.”
Oswego East High School’s mural has the theme of “Preserving the Past – Protecting the Future.” When you look at their mural, you will notice that they have included Oswego’s old police station (the past) and they have also included a pack of Wolves with baby wolves (the future).
Both murals can be found near the training center entrance at the OPD.

“Mo is an amazing teacher and coach,” said Laura Bankowski, principal at Oswego East “and I am really excited that he is receiving this recognition.”
Molinari has been coaching soccer at Oswego East High School for 11 years. He is also the Kinetic Wellness teacher that teaches Excel, a strength and conditioning class, which is offered to Juniors and Seniors. He has played soccer his entire life.

However, when he attended Marshall University, he decided to take a break from soccer and played baseball instead.
He credits his dad, a Marine and bricklayer, as his greatest inspiration.

Join other seniors at the Oswego Senior Center located at 156 E. Washington St., for this activity to hand tie fleece blankets for critically ill children on Tuesday, Dec. 3 at 10 a.m.  Join us anytime the first Tuesday of each month.

The Oswego Senior Center also needs a volunteer to call bingo on Mondays and Thursdays, 1 – 2 p.m. and more volunteers for serving lunch and clean-up on Mondays, Wednesday and Thursdays; 10:30 – 1:30.  Volunteers need to be at least 14 years of age. Call 630-554-5602 for more information or to volunteer.